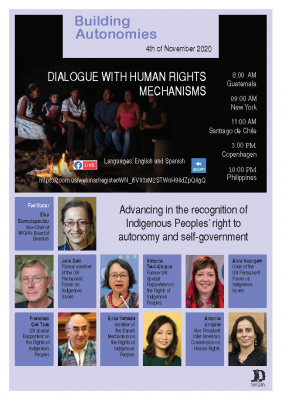 The UNSR’s report describes different situations all over the world with regard to the realisation of Indigenous Peoples' self-determination through autonomy and self-government and the UNPFII report focuses specifically on the experiences of Indigenous Peoples, backgrounds of various Indigenous autonomies, options available to Indigenous Peoples and obstacles that Indigenous Peoples face when trying to exercise their rights according to international law.  Both reports include specific recommendations to States, UN institutions, Indigenous Peoples and other relevant stakeholders on how to advance implementation of this crucial right for Indigenous Peoples.
About the book "Building Autonomies"
In 2020, the International Work Group on Indigenous Affairs (IWGIA) published a brief analytical publication titled "Building Autonomies" which includes the reports issued by the UNPFII and UNSR.
The publication offers an overview of the events and processes being implemented and built by Indigenous Peoples around the world. It also shares the progress made by States regarding constitutional or legislative aspects related to individual and collective Indigenous rights. It recounts situations and experiences from America, Europe, Asia, Africa and Oceania, demonstrating the wealth of potential within the Indigenous movement to obtain the legitimisation of their right to self-determination.
The book aims at contributing to the process of legitimising and advancing the recognition and exercise of Indigenous Peoples' right to self-determination in domestic and international law. It further aims at coordinating visions and sharing experiences of the difficult path to building and practising autonomy and self-government.
The publication can be downloaded at:
https://www.iwgia.org/images/publications/new-publications/2020/Building...
Click below to register for the event
Event link