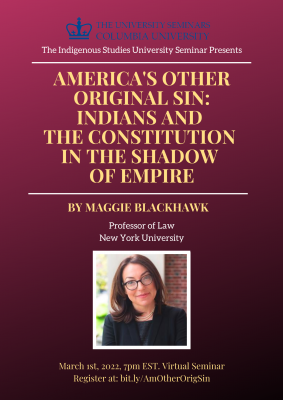 Mar 1, 2022 07:00 PM
"In many ways, America is just beginning to reckon with its original sin of human slavery and its retrenchment in Jim Crow segregation. Americans have grown suspicious of state and local governments using state power against minorities. But America has not yet begun to reckon with, nor fully dismantle the legal and governmental infrastructure that permitted its other original sin –that is, the abuse, forced assimilation, and violent dispossession of Native Americans. This history is lost to our discussions of good governance and how best to protect the most vulnerable within our democracy. We have also not begun to dismantle the government structures that facilitated the abuse against Native people. In other words, we are long overdue to confront America’s other original sin against Native Americans."
By Maggie Blackhawk
Professor of Law at New York University
Click below to register
Event link