P.C. Chang and the Universal Declaration of Human Rights 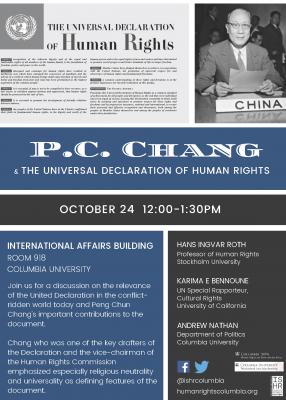 The Universal Declaration of Human Rights is one of the world’s best-known and most translated documents. When it was presented to the UN General Assembly in December in 1948, Eleanor Roosevelt, chair of the writing group, called it a “Magna Carta for all mankind”. The passage of time has shown Roosevelt to have been largely correct in her prediction as to the Declaration’s importance. No other document in the world today can claim a comparable standing in the international community. This year is also the 70th anniversary of the Universal Declaration of Human Rights.

Roosevelt and French legal expert René Cassin have often been presented as the principal authors of the UN Declaration. In fact, it resulted from a collaborative effort involving a number of individuals in different capacities. One of its most important authors was Peng Chun Chang (1892–1957), a Chinese diplomat and philosopher whose contribution has been the focus of growing attention in recent years. Indeed, it is Chang who deserves the credit for the universality and religious ecumenism that are now regarded as the Declaration’s defining features. Despite this, Chang’s extraordinary contribution was overlooked for many years by historians of the Declaration.

Peng Chun Chang was a modern-day Renaissance man with many strings to his bow – teacher, scholar, university chancellor, playwright, diplomat, and politician. A true cosmopolitan, he was deeply involved in the cultural exchange between East and West, and the dramatic events of his life left a profound mark upon his intellectual and political work. Chang´s alma mater was Columbia University where he took his PhD under the supervision of John Dewey in 1923.

The purpose of this seminar is to discuss the relevance of the United Declaration in the conflict-ridden world today and Peng Chun Chang´s important contributions to the document. Chang who was one of the key drafters of the Declaration and the vice-chairman of the Human Rights Commission emphasized especially religious neutrality and universality as defining features of the document.

Among the participants in the seminar is Hans Ingvar Roth Professor of Human Rights at Stockholm University who has recently published the book “P.C.Chang and the Universal Declaration of Human Rights” (University of Pennsylvania Press) which is the first biography of this extraordinary actor upon the world stage. Drawing upon previously unknown sources, it casts new light upon Chang’s life and involvement with one of history’s most important documents. Participating in the seminar is also Professor Karima E Bennoune from the University of California at Davis. Professor Bennoune is the UN Special Rapporteur on Cultural Rights for the United Nations. Participating is also Professor Andrew Nathan from the Department of Politics at Columbia University.