I am an activist at heart. I was a student in the 1976 uprisings in South Africa, and I saw how we as students did that, and how things changed around us as a result. And as we marched, I began to realize how many people actually fought for my country and how the world came together through boycotting certain South African products. As a young girl, I knew which was a “whites only” toilet and which was a “blacks only” toilet. If I were to get sick and a “whites only” ambulance came, I knew I would rather be dead than to be taken in that ambulance.

I began to ask myself, what is it that I can do to make the lives of those in my community better? Eventually, I began to look into the affairs of children, especially the challenges that were most affecting their lives. I began to realize that many of these issues were around HIV/AIDS. It saddens me to realize that 30 years into the HIV/AIDs pandemic, my country is not doing that good. When you read the reports, it’s almost like we’re going back in time as far as prevention is concerned. I want the world to know that they should not be fatigued by HIV/AIDS. I’m seeing much activity around the AIDS Conference and World AIDS Day, but it cannot be only during the conferences and commemorative events that we are so “awake” about HIV/AIDS. The fact of the matter is that children are still losing their parents to HIV. I just want the world to know that HIV/AIDS is still there and to let more research be done on how we could actually have a zero-tolerance of HIV/AIDS. I think the face of HIV/AIDS has always been a black woman and a black child, and that’s the truth. And how do we empower them so that we change that face into a face of hope? Money is needed, empowerment of women is needed, and gender-based violence needs to actually be addressed. I want to say to the world, especially to policy-makers, no, this is not how the children would want it to be. I just want to leave this world a better place for children. If I die having seen just a little bit of that, I would die a satisfied woman.

Through the Human Rights Advocates Program, I’ve been exposed to many different people and their knowledge. I’ve learned how other women are working: women from Kenya, women from Greenland, women from the Philippines, among others. I have been gathering information on how things could be done better back home, and how to use an evidence-based approach to my work, how to fundraise, and how to present my work. I’ve also been exposed to issues that I wasn’t as familiar with, such as LGBT issues. I will take this home with me. I am so grateful because I know for sure that when I get back home, we will move from being good to being great as an organization, because of what I’ve been exposed to here. 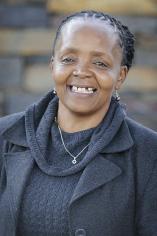