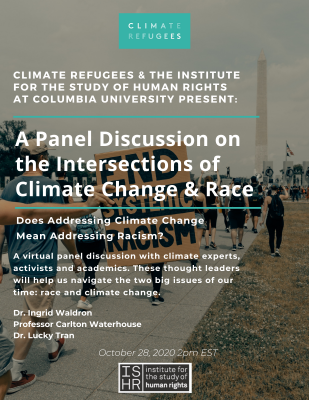 Climate Refugees (https://www.climate-refugees.org) And The Institute For The Study Of Human Rights At Columbia University Bring Together Experts In Environmental Racism, Indigenous Rights, Climate Science And Racial Justice To Discuss The Two Big Issues Of Our Time: Race And Climate Change.
The climate crisis disproportionately impacts marginalized populations, many of whom may be displaced or forced to migrate, because of years of unequal access to opportunities and gaps in human rights. The COVID-19 pandemic, George Floyd’s murder and the ensuing protests for racial justice – coming on the heels of one another – equally demonstrate the impacts of two very different crises that have disproportionate impacts on Black, Indigenous and People of Color (BIPOC) because of systemic unequal access to opportunities, a link Climate Refugees made in an Op-Ed on race and asylum. Philip Alston, the UN Special Rapporteur on Extreme Poverty and Human Rights’ report on Climate Change and Poverty, revealed developing countries will bear 75 percent of the financial costs and losses associated with the climate crisis, despite contributing only 10 percent of carbon dioxide emissions, creating a situation in which those in extreme poverty now also live in extreme weather. The report warned of increasing divisions as well, the risk of a ‘climate apartheid’, where the wealthy escape the negative impacts of climate change, leaving impacts to be borne by disproportionate groups ostracized by divisions, including race. In the U.S., people of color are far more likely to live near pollutants, Black communities face higher risks from air pollution, and Black mothers are most affected by pregnancy risks associated with climate change, linking race, even more than poverty, to environmental pollutants, something long stated by environmental justice and indigenous rights activists.

Bios:
-Professor Philip Alston is the John Norton Pomeroy Professor of Law at NYU, where he co-chairs the NYU Center for Human Rights and Global Justice. He has a distinguished career in the field of international law and human rights. In human rights he was appointed in 2014 as the UN Human Rights Council’s Special Rapporteur on extreme poverty and human rights and has visited and reported on Chile, China, Mauritania, Romania, and Saudi Arabia. He was previously UN Special Rapporteur on extrajudicial, summary, or arbitrary executions from 2004 to 2010 and undertook fact-finding missions to 14 countries. He was a member of the Group of Experts on Darfur appointed in 2007 by the UN Human Rights Council, and was special adviser to the UN High Commissioner for Human Rights on the Millennium Development Goals. He chaired the UN Committee on Economic, Social, and Cultural Rights for eight years until 1998, and at the 1993 World Conference on Human Rights he was elected to chair the first meeting of the Presidents and Chairs of all of the international human rights courts and committees. He was UNICEF's legal adviser throughout the period of the drafting of the UN Convention on the Rights of the Child. In 2010-11 he was a member of the Independent International Commission investigating human rights violations in Kyrgzstan. As a UN official, he has worked for several other UN agencies and NGOs, throughout his career, as well as taught international law at several prestigious universities, including Fletcher School of Law and Diplomacy and Harvard School of Law.

-Dr. Ingrid Waldron is a sociologist and Associate Professor in the Faculty of Health at Dalhousie University, Director of the Environmental Noxiousness, Racial Inequities & Community Health Project (The ENRICH Project)and the Flagship Project Co-Lead of Improving the Health of People of African Descent at Dalhousie’s Healthy Populations Institute. She is the author and co-producer, respectively, of the book and documentary "There's Something in the Water: Environmental Racism in Indigenous and Black Communities”, directed by Ellen Page and Ian Daniel. Dr. Waldron received a BA in Psychology from McGill University, an MA in Intercultural Education: Race, Ethnicity & Culture from the Institute of Education at the University of London, and a Ph.D. in Sociology & Equity Studies in Education from the University of Toronto. She was also a postdoctoral fellow in the Faculty of Medicine at the University of Toronto. Her doctoral and postdoctoral research at the University of Toronto focused on the impacts of discrimination on the mental health of Black women in Toronto, their conceptualizations of mental illness and help-seeking, and racism within psychiatric discourse and practice. Her research, teaching, and community leadership and advocacy work in Nova Scotia are examining and addressing the health and mental health impacts of structural inequalities within health and mental health care, child welfare, and the environment in Indigenous, Black, immigrant, and refugee communities.

-Professor Carlton Waterhouse is an international expert on environmental law and environmental justice, as well as reparations and redress for historic injustices. He lectures globally on climate justice and group based inequality. In 2019, he testified before the Inter-American Commission on Human Rights of the Organization of American States and in 2018 he completed a Fulbright research fellowship in Brazil examining race and police violence. His views have been published in the New York Times, the Wall Street Journal, and many other media outlets. His scholarship includes essays, articles, and book chapters focused on the ethical and legal dimensions of environmental justice and reparations. He is currently completing a book on Social Dominance and the Supreme Court that explores the Court’s past and current role in maintaining racial hierarchy in American society. Professor Waterhouse began his career as an attorney with the EPA, where he served in the Office of Regional Counsel in Atlanta, Georgia and the Office of General Counsel in Washington, D.C. He is a Professor of Law at Howard University, where he is building the building the Howard University Environmental Justice Center at Howard Law School. Drawing from his unique background, Professor Waterhouse examines civil rights, human rights, and environmental issues from a multidisciplinary approach. He actively participates in national, local, and international organizations protecting civil rights and addressing environmental issues like climate justice.

-Dr. Lucky Tran, is a science communicator based at Columbia University, where he is the Director of Communication and Media Relations at the Irving Medical Center. He holds a PhD in molecular biology from the University of Cambridge. As a steering committee member, he was one of the organizers of the March for Science, the largest day of science advocacy in history, with over one million participants in over 600 cities worldwide. Lucky has also been an organizer with the People’s Climate March, Occupy Wall Street, and was a founding member of artivist collective, the Illuminator. He’s worked as a science journalist and media personality because he enjoys helping people understand science through various mediums, including via award-wining movies that explain complex science in simple ways, featured in the Washington Post, NBC, CBS, Time, National Geographic and more. HIs views have been published in print, radio, tv and online in the in the New York Times, Wall Street Journal, NPR, The Atlantic, VICE and many more. Lucky is a refugee who grew up in Australia and now lives in New York. As a scientist and refugee, his two main areas of activism are climate justice and immigrant justice.