“Being at Columbia was such a wonderful experience, it really opened my mind and got me to see legal education and human rights education in a very different way [from how] I was seeing it in Mexico.”

On February 27, Carlos R. Asúnsolo Morales, an alumnus of the 2017 Human Rights Advocates Program (HRAP), spoke on “Human Rights Education for Lawyers in Mexico” at Columbia University in a dialogue sponsored by the Columbia University Center for Mexican Studies, the Human Rights Institute at Columbia Law School, and ISHR. Carlos’s talk kicked off HRAP’s 30-Year Anniversary (1989-2019) Alumni Speaker Series. Carlos currently works as the Human Rights Project Leader at the Research Center for the Teaching and Learning of the Law (CEEAD) based in Monterrey, Mexico. Founded in 2008, CEEAD works on “transforming the teaching of law in Mexico.”

“[HRAP] had a really specific impact in the work I do, and the reason I am back here is because I thought it was very important for people to have the same experience that I had in Mexico, especially deans from law schools from different parts of the country, to visit top law schools in the US.”

The event began with Carlos thanking HRAP, explaining how he incorporates into his work much of the training he acquired at Columbia. He pointed to the study tour CEEAD was leading that week for law school deans from Mexico to NYU and Columbia law schools as one of the programs inspired by his HRAP participation. Carlos then started his presentation with a simple diagram indicating human rights education as the opportune junction for addressing both the human rights crisis in Mexico, as well as challenges in the legal education system. He proceeded by launching into a discussion of the human rights crisis in Mexico.

“The crisis has been becoming worse… We have more than 30,000 disappearance cases [between 2006 and 2017]. We have more than 234,000 deaths… and you have the cases of femicides against women [and] the second most violent country for people based on sexual orientation. If you remove countries like Syria, Libya, and Afghanistan, Mexico is the most dangerous country to practice journalism”.

Carlos describes how the country fails to meet its human rights obligations, asking “How do you teach law in a context that does not respect law?” The legal community typically believed that constitutional reform would solve the problem, but Carlos believes that reform alone does not solve the problem.

“When you look at Constitutional reform, you will not see any kind of diagnosis of what is happening at law schools, and in the end [the law students] are the ones who are going to insert their practices into the legal system… If you are not educating [them] according to these reforms, it’s simply not going to work.”

Carlos introduced CEEAD’s programming and development of law school curricula that incorporates human rights education, citing that their online courses are consistently at capacity and their curricula has been downloaded online more than 3000 times.

“At the end you have a very complex scenario of human rights crisis in Mexico, you need to look at what specific things law schools can do and need to start doing, and CEEAD is [advising] that: for universities to do their job on human rights education. We hope that is going to have a really deep impact in the way lawyers invoke human rights in their regular basis practices.”

Carlos’s bio can be found on the ISHR website at http://humanrightscolumbia.org/hrap/advocates, and more information about CEEAD can be found at www.ceead.org.mx.

The celebration of HRAP’s 30-Year Anniversary will continue with the Alumni Speakers Series including conversations with 2009 Advocate Karyn Kaplan, the Executive Director of Asia Catalyst, and 2010 Advocate Bakary Tandia, the co-founder of The Abolition Institute. – Nicholas Perez 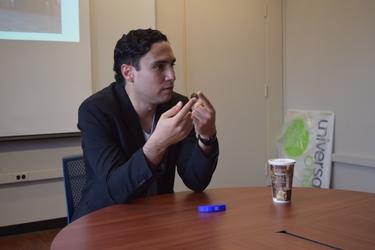