"Global Indigenous Youth: Through Their Eyes"

A new book results from the collaboration of the Institute for the Study of Human Rights and the Global Indigenous Youth Caucus
Wednesday, May 15, 2019

In record time from the moment the idea was born for this book, in April 2018, the book was launched at UN Headquarters on April 25, 2019, and 400 copies were distributed. The excitement was palpable. The room was packed, standing room only. Indigenous Youth is speaking out, clearly, their own voices are here, telling the world about challenges, dreams, disappointments, hopes, demands, struggles, visions…

Fourteen Indigenous young people from the seven Indigenous socio-cultural regions of the world, and also the three Co-Chairs of the Global Indigenous Youth Caucus, attended to this book with tremendous care and dedication. Each author was chosen by her/his own region through consensus processes, a participatory paradigm that we can all learn from.

The beautiful artwork for the book cover was offered by our youngest author, the 17-year old Seqininnguaq Lynge Poulsen. The acknowledgements to all contributors to this project were written by the three co-editors of the book: Dali Angel Pérez, Victor Anthony Lopez-Carmen and Elsa Stamatopoulou. The foreword was contributed by the United Nations Secretary-General’s Envoy on Youth, Jayathma Wickramanayake. Many of the authors and the representative of the Envoy on Youth spoke at the book launch.

The Indigenous Peoples’ Rights Program of the Institute for the Study of Human Rights, dedicated to human rights advocacy, research and teaching, consider the collaboration with the Global Indigenous Youth Caucus and the Tebtebba Foundation for this book a testimony to the social relevance and potential of academia. We hope that the book will make even more visible the continuing and robust Indigenous Youth voices that bring new life and broad horizons to the struggles for social justice, peace and human rights and for a sustainable world of well-being and diversity.

To order copies of the book, please write to ishr@columbia.edu. 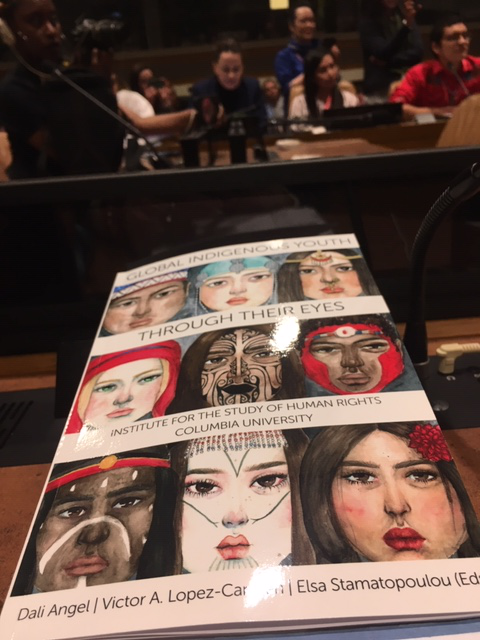