Grassroots Peace-Building in Bosnia Working with Youth and the Arts

In early April, 2012 Advocate Kemal Pervanic spoke on “Grassroots Peace-Building in Bosnia Working with Youth and the Arts” at Columbia University in a dialogue sponsored by the Human Rights Advocates Program (HRAP), and the Harriman Institute at Columbia University. Kemal’s talk served as the third feature for HRAP’s 30th Anniversary (1989-2019) Alumni Speaker Series. Kemal currently serves as the Founder and President of Most Mira (Bridge of Peace), an organization determined to steer the youth of Bosnia away from a future of division and hate by bringing children and young people of different ethnic backgrounds together through the arts.

“My  parents never told me that my friends were different form me. At the age of 7 I started at school in my village and I had a carefree childhood. At school I didn’t make any difference between myself and my classmates. If you liked somebody in the classroom it was not because they belonged to one group--it was because of who they were.”

Kemal began his discussion by recounting his childhood growing up in the former Yugoslavia. He described a relative peace among the different communities in his village despite difficult familial and communal memories of World War II. Kemal shared that although he did not understand much about politics in his youth, he remembers when Muslims were given legal status in 1971, and when violence was erupting in Kosovo in the early 1980’s:

“Propaganda was dominated by the Serbs and the Communist party. When I heard the word ‘separatists’ on the radio or television I didn’t understand this word, but I understood that they wanted something bad. There were also some reports of incidents where Albanians shot some Serbs, and every time it was reported, Albanians were reported as the bad guys. [It made me] wary of Albanians when I started my national service.”

After beginning his national service and working alongside Albanians though, he discovered the inaccuracy in the television reports that portrayed Albanians negatively. Kemal continued to recount how at the same time he was in the service, Milosevic came to power, marking the “end of innocence of [his] generation.”

“He changed my life before things actually happened to me. We had a really bad economic crisis in the former Yugoslavia. The Communist party lost its power, and in that situation somebody [came] along and [said] they can make things better, and they want to get hold of power at all costs, very often [taking] us to wars. This is the story of Milosevic. He was not a unifier.”

Kemal then described how the rise of Milosevic lead to the political manipulation of the populace, influencing a divisive referendum in Slovenia, independence declarations in Slovenia and Croatia, and the dispatching of armed forces to attack their own people. Kemal’s village on the Bosnian border with Croatia, suddenly found itself on the front lines of the  war, close enough to hear the sounds of heavy gunfire.

“I never thought someone would come to my village and actually try to kill me. My Serb neighbors went to Croatia to fight against the Croats, I said no and most Muslims said no but they threatened to attack us if we  said no. While the trouble was brewing I had no previous experience of such events and I didn’t think I needed to leave. People who lived through WWII knew better than me.”

The next part of Kemal’s talk incorporated anecdotes of how he remembered seeing the ethnic reorganization of the police forces, and the activation of neighbors in the installation and operations of concentration camps in his town. In 1992, an old mine close to his village was converted into a camp where Kemal says the crimes and violence that took place were by no means “impersonal” nor orchestrated by “strangers”. He then showed an old class photo of his and cross-identified an individual in the photo with another picture taken inside the concentration camp where that same individual had been armed. Seeing old neighbors, classmates and friends in the camp contributed to a terrible nightmare within the camp’s walls.

“The summer was scorching hot… the camps were infested, there was no food, [and] we were dirty, I washed my hands with soap once in 73 days. The reign of terror [continued] never knowing if they were going to kill you. I saw former neighbors even put their heads down before they started torturing and killing people. One of my guards was my former teacher; another teacher was my torturer and interrogator. Inside the Omarska camm Kemal focused on accepting reality and concentrated on continued survival. In there he learned that there is a capacity for killing in every human being”.

After surviving the camp, Kemal accepted relocation to the United Kingdom where he says his real problems began.. He became tormented with his camp experiences. His experience through the bureaucratic British immigration system made him feel reduced to a “a piece of paper” though, and Kemal described encountering a new challenge of transcending the process of dehumanization to discover his resilience.

“I learned through my experience how resilient human beings are. I was targeted twice… but I survived. I never feel guilty about my experiences but lots of activists can’t walk away from this guilt especially if they have family still missing. It’s a miracle that I still survived.”

Kemal continued the conversation explaining that once he was ready to seek answers, he traveled back to Bosnia in 2002 to document witness testimonies and interview individuals including a former favorite teacher of his who had served as a camp interrogator. The uneasy interview, Kemal recalls, resulted in the man asking for forgiveness, as the man said what Kemal interprets as a common perpetrator explanation: “I was in the wrong place at the wrong time and I was following orders”. In 2005, Kemal returned to Bosnia again where he set out on a new quest.

“What alarmed me [after the war] was how young Bosnians were treated by politicians, teachers, and community leaders. Because of this [history] and the economic situation, they could start fighting against each other one day. This is how Most Mira was born. I thought perhaps I could do something, and I also believe that we cannot sit back and allow politicians to do things for us”.

Kemal decided to start a charity and seek volunteers to establish an organization where children who are taught different versions of the past could come together to hear from each other in order to learn more about their own histories. Unfortunately, this idea could not take root at this point in time as everyone preferred to stay away from the recent past. Instead, Most Mira adopted a new arts-based approach to reconciliation.

“We brought young people together in the football pitch on the ground in my village where the first atrocities happened. People never think of doing something like this. We need to show the world that we can create beautiful things in places of suffering without ignoring that past and the suffering.”

Wrapping up his discussion, Kemal discussed Most Mira’s current project in development: the construction of a Most Mira peace center. Starting the project this year, Kemal expressed his excitement in how he and his organization are constructing a building designed by young people to house and preserve their peace-building initiatives.

Kemal’s bio can be found on the ISHR website at www.humanrightscolumbia.org/hrap/advocates, and more information about Most Mira can be found at www.mostmiraproject.org/. – Nicholas Perez 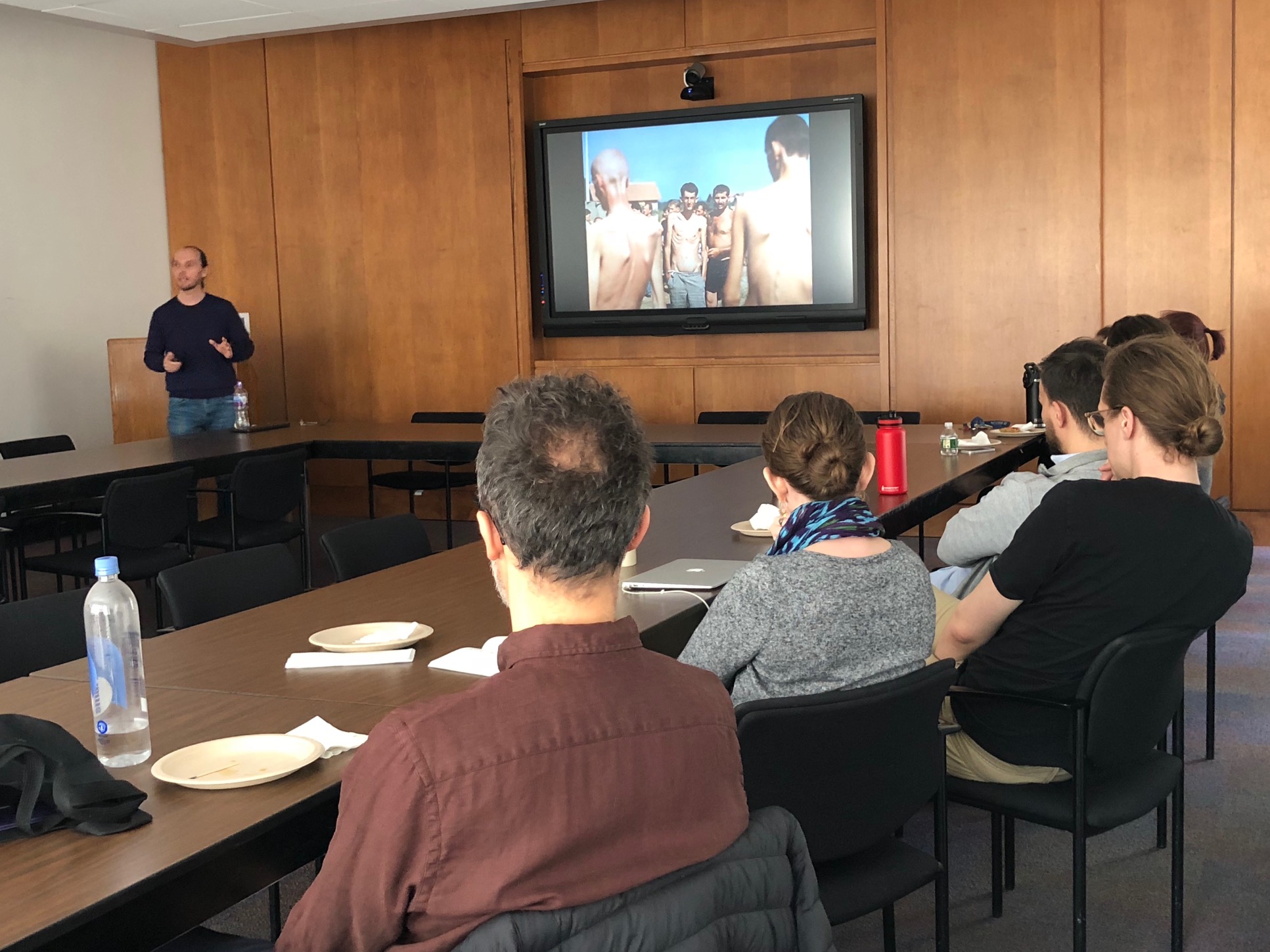