How to identify a contemporary authoritarian regime

To identify a contemporary authoritarian regime, we can start by asking what Hungary and Brazil have in common.
Friday, March 13, 2020

Across the Atlantic Ocean and the Equator, Viktor Orban, Hungary’s Prime Minister, and Jair Bolsonaro, Brazil’s President, hold a lot in common. They have introduced similar legal, political and institutional reforms aimed at centralizing power in a world still fond of the idea of democracy. One element is in their favor: both leaders have been elected. Yet, both Orban and Bolsonaro delved in the same playbook for producing an authoritarian regime while apparently sustaining a democratic one: the adoption of supposedly fragmented initiatives, which reveal their complete anti-democratic character when interpreted holistically. While Orban started his reforms ten years ago, Bolsonaro has implemented a considerable number of policies in a much shorter timeframe: the last 13 months.

There are at least five areas of reform, tackled by both Hungary and Brazil: 1) the creation of the “other”; 2) the weakening of governmental institutions; 3) the exclusionary pact between religion and state; 4) restrictions to funds for civil society organizations (CSOs); and 5) persistent or increasing levels of corruption.

The creation of the “other” is based on the creation of a bogus enemy. Taking advantage of the 2015 refugee crisis, Orban’s first bogus enemy were refugees. Instead of protecting innocent families, who were fleeing from the horrors of the Afghanistan and Syria wars, Orban fueled a fear of the “other”: specifically, the Muslim and non-European “other”. According to a Pew survey in 2016, 76% of Hungarians, the highest number in Europe, believed that refugees increased the likelihood of terrorists’ attacks in the country. As the discourse on refugees started to lose some of its traction in the 2019 municipal elections, Orban began testing new bogus enemies: from prisoners and the Roma to LGBTI groups. One thing, however, remained the same: the supposed need for anti-rights’ policies in order to face the bogus threat, such as the criminalization of activists and restrictions to human rights organizations’ access to funds.

In Brazil, Bolsonaro decided to build a broad array of “others” as soon as he came into power: Black, poor youth in big cities, LGBTI groups, women rights’ activists, teachers, indigenous peoples and the landless movement, to cite some. In Brazil the bogus enemies were also portrayed as excuses for implementing anti-rights’ policies, such as the shoot-to-kill policy in the states of Rio de Janeiro and Sao Paulo, where the Rio police killed more than 1800 persons in 2019 alone, the highest number since killings started to be measured in 1998. Other such policies included the boost in the movement for “non-partisan” schools that has managed to push forward almost 200 bills and laws around the country imposing censorship against any “political, religious or philosophical ideologies” (that is, against LGBTI rights and gender equality); and the hatred discourse against indigenous peoples which has fostered a significant increase in deforestation.
The anti-rights policies are also strengthened through more traditional tools, such as the weakening of governmental institutions responsible for monitoring the Executive branch. In Hungary, Orban has tested a number of policies to reform the judicial system, including the steep and sudden decrease in the retirement age, which forced 274 judges into retirement in 2012, and the stacking of the Constitutional Court with loyalists.
In Brazil, while Bolsonaro has stepped back, so far, from his campaign promises to increase the number of Supreme Court Justices from 11 to 21, he has promoted more nuanced but effective policies that weaken monitoring institutions, such as the National Preventive Mechanism and the National Space Research Institute (INPE). In July 2019, Presidential Decree 9.831 extinguished the salaries of 11 members of the National Preventive Mechanism, which is responsible for monitoring torture in prisons and psychiatric hospitals around the country. According to the United Nations Sub-Committee for the Prevention of Torture, this Decree directly violated the Optional Protocol to the UN Convention against Torture. Monitoring has also been curtailed by censoring institutions in other fields. In mid-2019, for instance, Bolsonaro dismissed the president of INPE, after the latter announced that deforestation in the Amazon Forest had increased 88% in comparison to June 2018.
Both Orban and Bolsonaro have also carved an exclusionary pact between religion and state, at times attacking what the far-right has named “gender ideology”, which is actually gender equality. In 2018, Orban’s government was able to include in the Hungarian Constitution a state obligation to protect the Christian culture. In 2019, Orban’s government cut all funds for gender studies in public universities. In Brazil, the movement for non-partisan schools, which has been supported by the president and the president’s former political party, has strengthened its call for censorship in schools, especially in regard to women’s and LGBTI rights. In this interpretation of Christianity, there is no space for gender equality or same-sex love.
CSOs have also been perceived as threats by both Orban and Bolsonaro. In 2017, Orban adopted a law, which was allegedly aimed at promoting transparency among CSOs, but which actually imposed restrictions to accessing funds by obliging such organizations to unveil specific details about their foreign donors and to identify themselves as “organizations receiving support from abroad”, much in tune with the Russian “foreign agents’” law. The Venice Commission and the Advocate General of the European Union have understood the 2017 law violated the right to freedom of association, among other rights. There is no democracy when individuals are forced to fight in isolation against the state.
Orban was, however, not satisfied. In 2018, he pushed for the adoption of more anti-CSO laws, which built on the creation of his first bogus enemy: refugees. One of those laws criminalized any support, including “funding”, “network building” and “production of informational materials” used to protect certain refugees’ rights in Hungary.
In Brazil, Bolsonaro has attempted to curtail funding for environmental civil society organizations. In early 2019, Bolsonaro’s administration tried to suspend all contracts between the “Amazon Fund” and CSOs. Once the government noticed how ill-conceived (and inefficient) he had been by forging a direct attack, it simply extinguished the participatory bodies of the “Amazon Fund”, leading Germany and Norway to halt their contributions to the Fund.
The similarities between Hungary and Brazil can also be found in persistent or increasing levels of corruption. Transparency International has just released its Corruption Perception Index for 2019. The index rates countries from 0 to 100, where zero expresses an extreme case of corruption and 100, a perfect case of integrity. Although Bolsonaro was elected with an anti-corruption discourse, Brazil kept itself at 35, below the average for the Americas, and fell to the 106th position in the world. A similar pattern can be perceived in Hungary. In this latter country, however, the backslide has lasted for 10 years. In 2019, Hungary rated 44, staying at the bottom of its region.
Stopping power centralization in Brazil requires a recognition of this contemporary form of authoritarianism, which is based not on a military coup—as we have seen in so many parts of Latin America in the last century. Rather, it is built on legal and institutional reforms that seem fragmented and nuanced, but when taken together, are apt to undermine the structure of democracy, from the protection of rights to rule of law.
This article was originally published in OpenGlobalRights.org 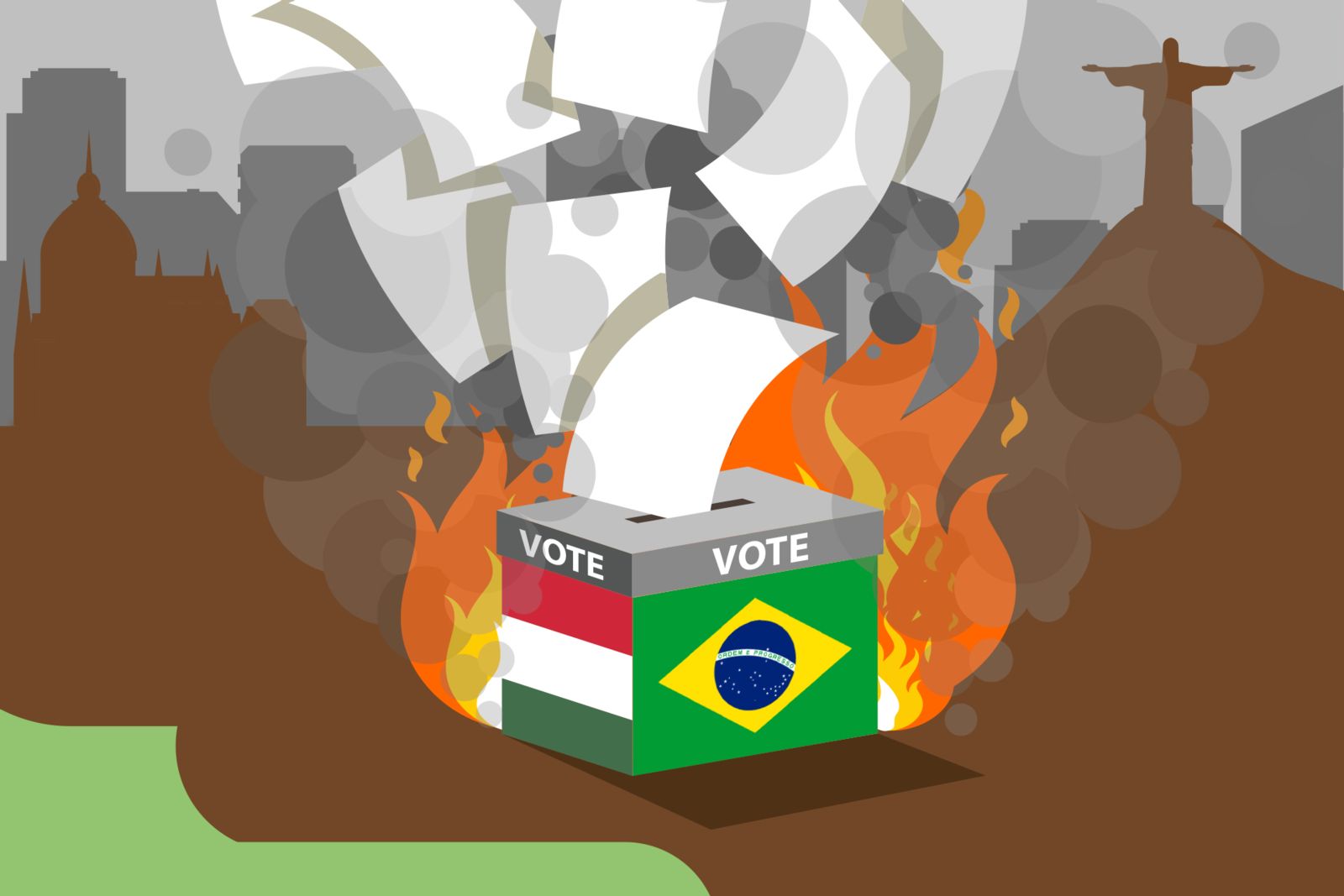