A New Publication of the Institute for the Study of Human Rights
Friday, December 1, 2017

We are pleased to announce the publication of a new book of the Institute for the Study of Human Rights. The book is a contribution of the Indigenous Peoples’ Rights Program to the Tenth Anniversary of the United Nations Declaration on the Rights of Indigenous Peoples.

The book has been conceptualized to address broad issues of conflict and peace pertaining to Indigenous Peoples and their human rights. While some of the chapters are geographically specific, they each address major questions that are relevant to many situations and are examples of broader interest. Inspired by Indigenous Peoples’ unwavering efforts and initiatives towards the resolution of conflicts, the book asks questions that underlie the global peace agenda, yet provide the Indigenous angle, in addition to highlighting topics that are particular to the situation of Indigenous Peoples: the human rights standards applicable in situations of conflict, including the United Nations Declaration on the Rights of Indigenous Peoples (the Declaration); the issue of the responsibility to protect; violence against women; women’s contributions to peace; environmental violence; grassroots peace movements and their strategies; the negotiation and implementation of peace accords; structural violence; seeking conflict resolution through the courts; the potential and limits of shaming and sanctions; and a peace-mapping model for sustainable peace that includes Indigenous theories of peace. The title of the book contains the phrase “unreported struggles” to underline the invisibility that often coats Indigenous Peoples’ struggles in the context of conflicts, as part of deeply engrained structural violence and its long-term historic roots of dispossession, trivialization and marginalization imposed on Indigenous Peoples by the colonial paradigm.

The book contains a number of case studies with a geographical focus at the national level—Chile, Nicaragua, Colombia, Russia, India, Bangladesh, the Philippines—or at the regional level, namely Africa, in the Great Lakes region and East Africa.

The Indigenous Peoples’ Rights Program of the Institute for the Study of Human Rights at Columbia University hopes that this book, edited by Elsa Stamatopoulou, will enrich the literature on Indigenous Peoples’ rights, conflict and peace and will inspire further research in this area.

Copies of the book are available from: 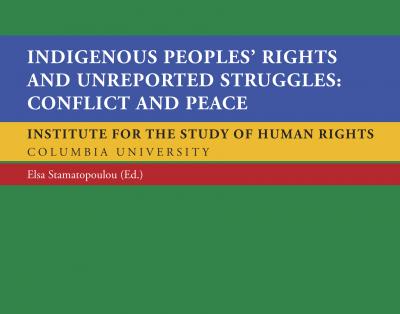