Before doing HRAP in 2005, Alejandra Ancheita worked for over a decade as a human rights advocate in Mexico. Upon her return, she founded the Project on Economic, Social, and Cultural Rights (ProDESC), a human rights NGO based in Mexico City whose primary goal is to defend the rights of the Mexican people by fostering the enforcement of and accountability for these rights on a systematic level. According to Ancheita, her time spent at HRAP contributed skills and relationships that were crucial to her foundation and leadership of a new human rights organizations.

In her years at ProDESC, and as a litigation specialist at the Miguel Agustin Pro Juarez Human Rights Center (Centro Pro) and the Center for Labor Support and Reflection (CEREAL), Alejandra has worked on strategic litigation and defense of human rights advocates and local communities. She has represented ProDESC at national and international conferences and committees, and argued cases before the Inter-American Commission of Human Rights, the Inter-American Court, and several national courts. In 2009 Ancheita received a Master’s Degree in International Law and Global Justice at the Fordham University Law School, with the support of a Leitner Center Scholarship. During 2010 she was a visiting Scholar at the Louis Stein Center for Law and Ethics, developing a research initiative called “Towards a Genuine Transnational Collaboration: Constructing Transnational Justice for Migrant Workers.” Alejandra returned to ProDESC in the fall of 2010, where she currently heads the Transnational Justice Area of the organization, coordinates fundraising activities, and designs strategies for ongoing and new ProDESC initiatives.

Ancheita believes that HRAP served as a platform to access tools for human rights capacity-building. It also allowed her to build networks with other human rights activists and organizations. Alejandra was one of the 25 finalists for the Grinnell College Young Innovator for Social Justice Prize.

Novermber 2016 update: In 2013, Alejandra received the Wasserstein Public Interest Award from Harvard Law School. She won the 2014 Martin Ennals Award for her efforts in the fight for the rights of the migrants, workers, and indigenous communities in her country. She is one of the leading Latin American voices in the human rights movement and has spoken in various international forums, such as the UN Forum on Business and Human Rights, the Women’s Forum for the Economy and Society and the OECD Annual Meeting of National Contact Points, as well as arguing cases before the Inter-American Commission of Human Rights and the national courts. She was acknowledged for her work as a human rights defender by the Mexican Senate in 2015 and by several communication media and by international institutions, such as the Spanish newspaper El País that named Ancheita one of the 25 most influential Latin Americans. 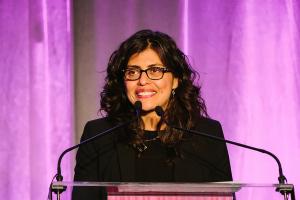