Musola Cathrine Kaseketi joined in HRAP in 2013, 11 years after founding Vilole Images Productions, a nonprofit dedicated to developing the film industry in Zambia, and using it as a platform to promote the arts and disability rights. The cause itself is quite personal for Kaseketi. When she was 18 months old, a medical mistake damaged her left leg, leaving her unable to walk without difficulty for the rest of her life. Enduring mistreatment by her stepmother in her early life and by her community overall, Kaseketi developed an incredible determination to succeed in spite of hardship.

During her time at HRAP, Kaseketi’s drive allowed her to take advantage of the opportunities afforded by the program. She states: “There is so much knowledge I acquired from participating in HRAP that has been useful to my work.” Kaseketi was further inspired after hearing the kind of work that her fellow advocates were involved in, and still keeps in contact with them to this day. In fact, one of the instructors whose workshop Kaseketi attended while at Columbia University, Melissa Warnke, became her mentor. Apart from meeting colleagues that would be an important part of her network, the program gave Kaseketi extremely memorable experiences. She writes: “My greatest memory is being one of the speakers at the Leitner Center for International Law and Justice at Fordham Law School during the symposium on disability rights. The symposium was open to scholars, practitioners and the public, and highlighted the backdrops of rural poverty and educational underdevelopment as barriers to inclusion and to education for persons with disabilities. Inclusion in relation to disability, especially women and girls with disabilities, is a critical issue in some developing countries, thus this meant much to me.”

Kaseketi is as motivated as ever to continue paving the way for change for people with disabilities. As of the summer of 2018, she completed the feature Smoke and produced four short films, Long Wait for Justice, Lwito-Light, Tuso-Help and Music Activity, which will be used in awareness campaigns. In 2016 she hosted the first Zambian Conference on Gender-Based Violence and Disability after doing community screenings and workshops in six provinces across the country; the theme for 2016 was “Awareness Raising through Film: Addressing and Preventing Gender Based Violence and Discrimination among Women and Girls with Disabilities.” Though it can be difficult to cope with the pressure of being Zambia’s first female film director and an inspiration to so many people, this only pushes Kaseketi to keep fighting for a cause that is deeply important to her. 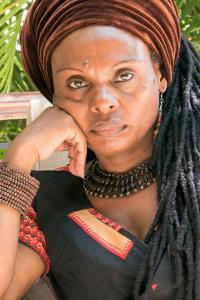