When asked about the contributions of the Human Rights Advocates Program, Peter Mulbah says, “Let me start by extending my many thanks and appreciation to HRAP and all those who gave me guidance throughout the program in 2008.” Mulbah is an HRAP graduate from Liberia and serves as the director of Skills and Agricultural Development Services. The organization is currently working on a community forestry program in Liberia with the goal of empowering forest-dependent communities to freely participate and equally benefit from Liberia’s natural resources.

SinceMulbah's very recent graduation from HRAP, his prominence as an environmental advocate has risen significantly. In his words, “Since I came from the HRAP program, everybody in Liberia sees me as a brand new person. In fact, they say ‘the new Peter has come.’ This has helped to increase my credibility and transparency; people call me every day for consultancy work.” Peter reports he has accordingly gained recognition locally, nationally, and internationally among civil society groups for his work. He is serving as the civil society representative on the National Climate Change Committee and is leading the National Stakeholders Consultation and Participation processes leading to the formulation of the Liberia Readiness Plan Proposal to be submitted in August to the Forest Carbon Partnership Fund at the World Bank. This requires him to travel extensively on behalf of Liberia, including to several international meetings and workshops on climate change. He received a sponsorship to participate in the Equitas Human Rights Program in Canada. He also participated in the Environmental Leadership Program at the University of Berkeley, California.

HRAP acts as a multi-disciplinary training program to provide human rights advocates with the training and expertise not only to advance the projects of their home organizations and individual pursuits, but also to improve their character and presentation as model leaders. For Peter, “HRAP increased my level of self-confidence. As a result, I am a regular guest on TV/Radio talk shows with regards to community rights to environmental sustainability and natural resources governance. I have grown overnight as a national expert, and thousands of people look up to me for guidance and direction on human rights advocacy.”

In addition to his already notable achievements and environmental advocacy work, Mulbah was invited to join the 2010 Kinship Conservation Leadership Fellows Program in June and July 2010 which will take place in the United States. He will also continue traveling extensively in his position as civil society representative on the National Climate Change Committee to participate in climate change negotiations prior to the 16th Conference of the Parties in Cancun, Mexico, in November 2010. Reflecting overall on his participation in HRAP, Mulbah states, “I cannot imagine where I would be without HRAP. What could be the future of my advocacy in Liberia? I shall forever be grateful to HRAP in all of my career and works that I do.” 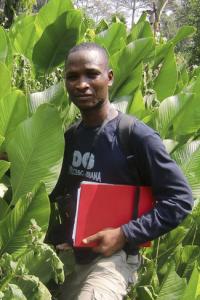