Shock and Disgust: Trump Turns a Blind Eye to Turkey's Slaughter of Kurds in Syria

President Donald J. Trump succumbed to Turkey’s demand for a “safe zone” in North and East Syria, announcing overnight that the U.S. is pulling back forces that have served as a trip wire deterring Turkey’s invasion. The pullback reverses years of U.S. policy, ignoring advice from the Pentagon and State Department. Trump’s decision is strategically flawed, tactically incoherent -- and morally repugnant.

More than 11,000 Kurdish fighters have died fighting ISIS in North and East Syria at America’s behest, and 22,000 more were wounded. Kurds were America’s boots on the ground fighting the ISIS caliphate in Syria.

U.S. cooperation with the Kurds dates back to the fall of 2014 when the Pentagon provided weapons and air support to the People’s Protection Units (YPG) and the Women’s Protection Units (YPJ) to defeat ISIS in Kobani. Since then, the Kurds defeated ISIS in Tell Abyad, the border crossing used by Turkey to supply its jihadist proxies in a Syria. Kurds were the point of the spear, liberating the capital of the ISIS caliphate in Raqqa. In March 2019, Kurds defeated ISIS in Baghouz, destroying its last sanctuary in Syria, after weeks of intense fighting.

Abandoning the Kurds, America’s only ally in Syria, will result in a bloodbath. Turkey’s President Tayyip Erdogan has pledged to cleanse Kurds and make way for refugees to resettle in Syria.

As we have seen in Afrin, which Turkey decimated in January 2018, heroic and highly motivated Kurdish defenders are no match for Turkey’s air power, armor, and criminal proxy, the Free Syrian Army.

The ISIS caliphate may be destroyed, but ISIS is far from defeated. U.S. Special Forces were relying on their Kurdish allies to keep the pressure on ISIS.

Thousands of ISIS fighters have been detained by the Kurds. As Kurdish fighters redeploy to counter Turkey’s aggression, ISIS detainees will escape and rejoin their Turkish compatriots.

U.S. Special Forces have already abandoned observation posts in Tell Abyad and Ras al-Ayn. Without U.S. protection, the Kurds have no place to turn for protection except the Syrian regime and Russia. As a result, America’s position in Syria will be further marginalized as we enter the political and military end-game of Syria’s civil war.

Washington’s precipitous withdrawal will destroy multilateralism, causing France and Britain, who support the Kurds, to pull back their forces. U.S. allies are dismayed by Trump’s decision to abandon a year’s worth of negotiations aimed at managing relations between Turkey and the Kurds, which kept Turkey’s invasion at-bay.

The flight of Kurds will destabilize Iraq, which is struggling with domestic unrest. Iraqi Kurdistan already hosts hundreds of thousands of displaced persons from the war in Syria and sectarian conflict in Iraq.

As we saw in Kobani, Turkish Kurds will protest Turkey’s invasion and war crimes. Resulting unrest risks civil war in Turkey. Violence will occur in Turkey’s Southeast, where Kurds predominate, Hatay Province along Turkey’s border with Syria, as well as Istanbul, home to more than one million Kurds.

Trump’s wrong and short-sighted decision not only betrays the Kurds. It discredits the United States to partners in the worldwide fight against ISIS. Who will fight and die for the United States the next time we need friends to counter violent extremism?

David L. Phillips is Director of the Program on Peace-building and Human Rights at Columbia University’s Institute for the Study of Human Rights. He served as a Senior Adviser to the U.S. State Department during the administrations of President Clinton, Bush and Obama. His most recent book is The Great Betrayal: How America Abandoned the Kurds and Lost the Middle East (Bloomsbury). His forthcoming book is titled Front Line Syria: A Political and Military History of the Civil War (Bloomsbury). 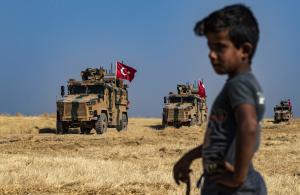