Connecting Students with Alumni to Make a Difference 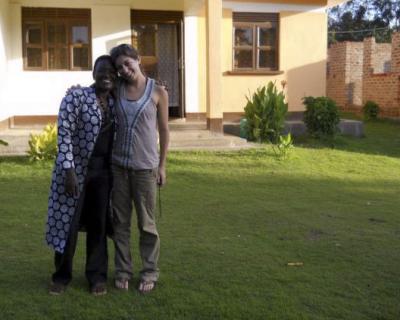 Allison Tamer (right) traveled to Uganda in 2012 to work with Charity for Rural Development.

The Student Volunteer Program (SVP) at the Institute for the Study of Human Rights (ISHR) was created in 2011 to support alumni of the Human Rights Advocates Program (HRAP). ISHR sends Columbia University human rights students abroad each summer to contribute to the advocacy efforts of HRAP alumni-led organizations. Between 2011 and 2013, a total of six students have volunteered at HRAP-affiliated grassroots organizations in India, Sierra Leone, Uganda and Kenya. SVP is beneficial to the human rights students too in that it immerses them in grassroots human rights advocacy efforts and gives them first-hand knowledge of human rights in the field.

Allison Tamer, who earned the Human Rights Studies M.A. (GSAS), travelled to Gulu, Uganda, in 2012 to work at the Charity for Rural Development (CHAFORD), which was co-founded by 2009 Advocate Evalyne Achan. The organization’s mission is to transform the lives of the communities affected by conflict through socio-economic interventions and good governance. Allison reported: “CHAFORD’s small staff and numerous projects provided me with a very hands-on and enriching volunteer experience. I traveled to Atiak frequently as the organization has a second office located in this region. During my extended trips to the field in Atiak, I was responsible for documenting CHAFORD’s projects for their quarterly reports. I monitored and observed CHAFORD’s facilitation of their women’s support groups such as the Village Savings Loans Associations and Land Rights Groups. I conducted interviews with CHAFORD’s beneficiaries and these interviews will be published in CHAFORD’s upcoming newsletter and website. Lastly, I took frequent day trips into the Amuru district to witness and facilitate community conflict resolutions for land disputes.” (Please see more about Allison’s work in Uganda in RightsViews.)

Evalyne writes that people in her village still ask about Allison. She added, “As a result of my experience hosting Allison, Gulu University, in partnership with universities in Belgium asked my family to host student volunteers from Beligum. At the moment, we have two student interns who are living with us and six more will come before the end of the year.” 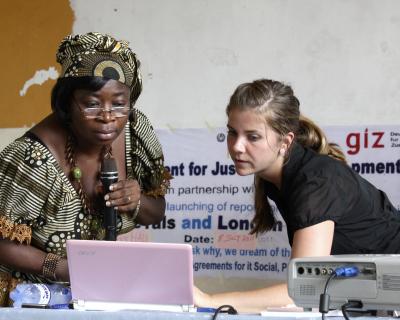 Jennifer Wilmore, who earned the MIA from SIPA with a concentration in Human Rights, worked with 2006 Advocate Agnes Tamba at the Network Movement for Justice & Development (NMJD) in Sierra Leone. Established in 1988, the organization plays an important role in organizing and mobilizing civil society organizations, capacity-building organizations and social movements around the country into strong networks and coalitions for effective and creative engagement with strategic stakeholders at all levels. While volunteering at NMJD in 2011, Jennifer visited artisanal mining sites in the western area of Sierra Leone with a research team of human rights activists. They documented the status of child miners just before the observance of the Day of the African Child on June 16.

Of the experience, Jennifer said, “Interning with NMJD in Sierra Leone was a deeply impacting experience for me, as it showed me firsthand the impacts that the mining and extractives sector has on both children's rights and certain economic rights in the country. It planted in me an interest in improving citizens’ access to information regarding their land rights and government agreements with foreign mining companies operating in their communities. This experience led me to study the issue further during my time at graduate school, and I also addressed similar issues related to access to information and property rights following graduation through my work with the World Justice Project.”

Aminata Kelly-Lamin of NMJD reported that Jennifer executed her responsibilities “with tact, aptitude and emotional stability. She performed every task…with great amount of managerial ability. She supported among others the launch of a sub-national and national report on cost benefit analysis on two corporate mining agreement, acting in the capacity of the Program Manager who was unavoidably absent due to some other crucial engagement. Jennifer exemplified her leadership ability by preparing an executive summary of the report and a press release to back-up the process for the press.”

Two students have worked at the Centre for Women's Development and Research (CWDR) in Chennai, India, which was founded by 2004 Advocate K.R. Renuka in 1993 in collaboration with other female activists committed to increasing the number of women leading NGOs in India. CWDR serves 90 slums in Chennai and 25 villages in Edaikazhinadu Panchayath, Kancheepuram district. The organization’s programming focuses on three groups: domestic workers, single women, and adolescent girls. It has recently expanded its programming to include income-generation projects for women, job placement for domestic workers and an afterschool program to help girls reach graduation and enter university.

At CWDR in 2011, Kimberly Rogovin, who earned the Human Rights Studies M.A. (GSAS), worked on grant proposals as well as conducted a survey with local shop owners and customers on the types of soap they buy in order to inform the Center’s soap-making business. She also started a Facebook page for the Center.

In 2012, Randi Aho, who earned an M.A. from SIPA with a concentration in Human Rights, designed a new format and theme for CWDR’s website using Photoshop. She updated information on the website and edited the information for grammar and new content. The Facebook page and Twitter account also needed constant updating and new development. As a volunteer, she was responsible for updating the organization’s Facebook and Twitter accounts. She drafted a letter for potential donors for CWDR, asking for funding for a project called Girls to Graduates. The program provides girls from the slums with school materials and after school support in order to ensure they successfully reach graduation. Randi summarized her experience as follows: “CWDR has an impressive history in defending women’s rights and promoting the development of women and girls. Their mission was well implemented and they have a surprising wealth of programming for such a small organization. Spending time with CWDR gave me insight into the management and structure of a grassroots NGO that should prove very valuable in my future endeavors.”

In 2013, ISHR sent a student, Morag Mwenya Mapoma Neill, for the first time to work at The Nyaka AIDS Orphans Project, which was founded by 1996 Advocate Twesigye Jackson Kaguri. Morag reported: “I was responsible for broadening its local fundraising strategy in Uganda. After my third week, I traveled to the Kanungu and Rukungiri districts to visit the Nyaka School. During this trip, we delivered nine donated computers to the classroom teachers at the Nyaka School. This trip gave meaning to my fundraising research; it demonstrated the extent to which the founder’s vision for implementing a holistic program to end poverty has been realized.”

Kelly Voss, Nyaka’s director of development, said the following about the benefits of having volunteers, “Their commitment and passion ensures we can carry out our mission to work on behalf of HIV/AIDS orphans in rural Uganda to end systemic deprivation, poverty and hunger through a holistic approach to community development, education, and healthcare. Hosting volunteers from Columbia University helps to bridge the gap between the continents of Africa and North America. It helps bring developing nations into the lives of students who are the next leaders of our ever-shrinking globe. It is a win-win for us all - thank you!”