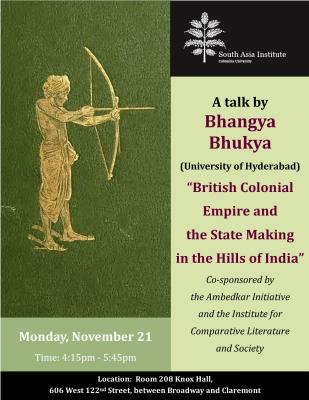 Moderated by Anupama Rao (MESAAS and History)
Co-sponsored by the Ambedkar Initiative and the Institute for Comparative Literature and Society
Abstract: Is primitivism a consequence of the natural evolution of some human societies? Or is it a conscious choice by such societies to evade state power? In this talk I set out to answer these questions by taking as my focal point the case of the Gond indigenous people of Deccan India. I examine the evolution of Gond society over an extensive period, demonstrating how the British colonial government created an administrative divide between the plains and the hills, thus stereotyping hill and forest communities as isolated, primitive, barbaric and uncivilized in order to deny them self-rule. The talk explores the ways in which colonial governmentality was introduced in the hills and in turn how the hill people responded to the entire state making process in the hills.
Dr. Bhangya Bhukya is presently Fulbright-Nehru Fellow in the Department of South Asian Studies, University of Pennsylvania. He is Professor of History at University of Hyderabad. He studied at University of Warwick, UK, for his Ph.D, and was British Council Visiting Fellow at SOAS, University of London. His works on Adivasi/indigenous society include Subjugated Nomads. The Lambadas under the Rule of the Nizams (2010) and The Roots of the Periphery. A History of the Gonds of Deccan India (2017). He work on regional history includes History of Modern Telangana (2017) and A Cultural History of Telangana: From the earliest times to 1724 AD (2022). As a public intellectual, he is involved in adivasi and dalit-bahujan movements in India.
Click below to see the event on the Institute for Comparative Literature and Society website
Event link