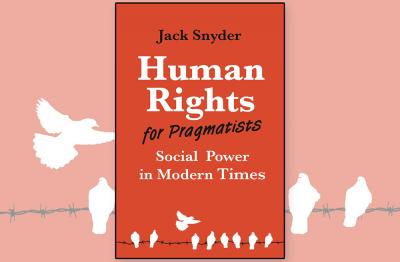 Human rights are among our most pressing issues today, yet rights promoters have reached an impasse in their effort to achieve rights for all. Human Rights for Pragmatists explains why: activists prioritize universal legal and moral norms, backed by the public shaming of violators, but in fact rights prevail only when they serve the interests of powerful local constituencies. Jack Snyder demonstrates that where local power and politics lead, rights follow. He presents an innovative roadmap for addressing a broad agenda of human rights concerns: impunity for atrocities, dilemmas of free speech in the age of social media, entrenched abuses of women’s rights, and more.

Exploring the historical development of human rights around the globe, Snyder shows that liberal rights–based states have experienced a competitive edge over authoritarian regimes in the modern era. He focuses on the role of power, the interests of individuals and the groups they form, and the dynamics of bargaining and coalitions among those groups. The path to human rights entails transitioning from a social order grounded in patronage and favoritism to one dedicated to equal treatment under impersonal rules. Rights flourish when they benefit dominant local actors with the clout to persuade ambivalent peers. Activists, policymakers, and others attempting to advance rights should embrace a tailored strategy, one that acknowledges local power structures and cultural practices.

Constructively turning the mainstream framework of human rights advocacy on its head, Human Rights for Pragmatists offers tangible steps that all advocates can take to move the rights project forward.

This event will be in person at the Heyman Center and live-streamed online. Please register for both in-person and virtual attendance via the link.

Jack Snyder is the Robert and Renee Belfer Professor of International Relations in the political science department and the Saltzman Institute of War and Peace Studies at Columbia University. His books include Electing to Fight: Why Emerging Democracies Go to War (MIT Press, 2005), co-authored with Edward D. Mansfield; From Voting to Violence: Democratization and Nationalist Conflict (Norton Books, 2000); Myths of Empire: Domestic Politics and International Ambition. (Cornell University Press, 1991); The Ideology of the Offensive: Military Decision Making and the Disasters of 1914 (Cornell 1984); and Civil Wars, Insecurity, and Intervention, co-editor with Barbara Walter (Columbia University Press, 1999).

Sarah Daly Assistant Professor of Political Science at Columbia University. She has been a visiting associate research scholar in Latin American Studies at Princeton University, a pre-doctoral fellow at the Belfer Center for Science and International Affairs at Harvard University, and a post-doctoral fellow in the Political Science Department and at the Center for International Security and Cooperation at Stanford University.

James A. Goldston is the executive director of the Open Society Justice Initiative, which advances the rule of law and rights protection worldwide through advocacy, litigation, research, and the promotion of legal capacity. A leading practitioner of international human rights and criminal law, Goldston has litigated several groundbreaking cases before the European Court of Human Rights and United Nations treaty bodies, including on issues of counterterrorism, racial discrimination, and torture.

Joseph Slaughter specializes in literature, law, and socio-cultural history of the Global South (particularly Latin America and Africa). He’s especially interested in the social work of literature—the myriad ways in which literature intersects (formally, historically, ideologically, materially) with problems of social justice, human rights, intellectual property, and international law. He is an Associate Professor in the Department of English and Comparative literature.

Andreas Wimmer is the Lieber Professor of Sociology and Political Philosophy in the Department of Sociology at Columbia University. His research brings a long-term historical and globally comparative perspective to the questions of how states are built and nations formed, how racial and ethnic hierarchies form or dissolve in the process, and when this will result in conflict and war. Most recently, he is trying to understand how ideas and institutions travel across the world and with what consequences.