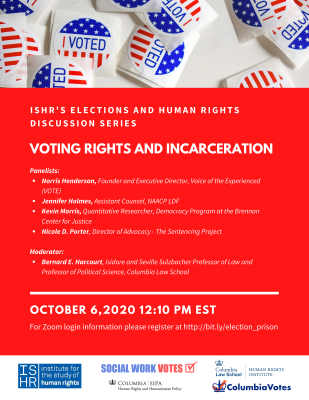 This panel discussion will examine how incarceration affects the exercise of voting rights. Experts will discuss issues including voting in prisons, restoration of voting rights, and the advocacy and political engagement work of formerly incarcerated persons.

Bios:
-Norris Henderson: Norris Henderson is the Founder and Executive Director of both VOTE and its sister organization, Voters Organized to Educate. Henderson is a former OSI Soros Justice Fellow, and has had tremendous success impacting public policy and discourse about reentry, police accountability, public defense for poor and indigent people, and reforming the notorious Orleans Parish Prison (OPP), also known as the Orleans Justice Center (OJC). In 2018, Norris served as the statewide campaign director for the Unanimous Jury Coalition, a ballot campaign that ended non-unanimous juries, and thus Jim Crow’s last stand in Louisiana. As someone who was wrongfully incarcerated for 27 years, Norris shares first hand experience of racism and brutality of the criminal justice system with communities of color across Louisiana. He was a jailhouse lawyer, a co-founder of the Angola Special Civics Project, and a trailblazer for freeing other wrongfully convicted people prior to the inception of the Innocence Project. While incarcerated, Norris co-founded a hospice program and also drafted a successful parole reform law for Lifers. Norris regularly speaks publicly in support of underprivileged communities in New Orleans, and acts as a general liaison to other community organizations in the city. Since his release in 2003 Norris has applied his 27 years of self-taught legal expertise and community organizing skills to a number of leadership positions, including Co-Director of Safe Streets/Strong Communities and Community Outreach Coordinator of the Louisiana Justice Coalition. Norris serves on a number of organizations’ Board of Directors including Common Justice and is a co-founder and steering committee member of the Formerly Incarcerated Convicted People and Families Movement, and winner of numerous awards in the civil rights community. ​

-Jennifer Holmes: Jennifer A. Holmes serves as Assistant Counsel at LDF, where she works on cases that advance racial justice in the areas of educational equity, economic justice, and voting rights. Jennifer was trial counsel on behalf of a coalition of Harvard student and alumni groups in SFFA v. Harvard , an ongoing lawsuit in which LDF is fighting to preserve the ability of colleges and universities to use race-conscious admissions to diversify their student bodies. Jennifer also helps develop LDF lawsuits that promote fair housing and economic security to strengthen communities of color and has authored amicus briefs filed in the U.S. Supreme Court.

Prior to LDF, Jennifer was an associate at Covington & Burling, LLP, where she represented primarily pharmaceutical companies and sports teams, while maintaining a robust pro bono portfolio that included criminal defense, economic justice, and immigrants’ rights. She previously served as a law clerk to the Honorable Nicholas G. Garaufis on the U.S. District Court for the Eastern District of New York.

A native of Washington, D.C., Jennifer received her J.D. from Stanford Law School and her B.A. from Yale University with distinction in Political Science. She is a member of the bars of the District of Columbia, New York state, and the Supreme Court.

- Kevin Morris: Kevin Morris is a quantitative researcher with the Democracy Program, focusing on voting rights and elections. His research focuses on the impact of laws and policies on access to the polls, with a particular focus on rights restoration and voter list maintenance.

Prior to joining the Brennan Center, Morris worked as an economic researcher focusing on housing at the Federal Reserve Bank of New York and an economist at the Port Authority of New York and New Jersey. He has a BA from Boston College in economics. He has a master’s degree in urban planning from NYU’s Wagner School, with an emphasis in quantitative methods and evaluation.
-Nicole D. Porter: Nicole D. Porter manages The Sentencing Project’s state and local advocacy efforts on sentencing reform, voting rights, and eliminating racial disparities in the criminal justice system. Her advocacy has supported criminal justice reforms in several states including Kentucky, Missouri, and California. Porter was named a "New Civil Rights Leader" by Essence Magazine for her work to eliminate mass incarceration.
Since joining The Sentencing Project in 2009, Porter's work has been cited in several major media outlets including the New York Times, Washington Post, and National Public Radio. She has given a number of talks on state sentencing policy, collateral consequences, and racial disparity to various audiences including the League of Women Voters, NAACP, and the United Methodist Women's Assembly.
Porter is the former director of the Texas ACLU’s Prison & Jail Accountability Project (PJAP). PJAP’s mission was to monitor the conditions of confinement in state jails and prisons. Porter advocated in the Texas legislature to promote felony enfranchisement reforms, to eliminate prison rape, and improve prison medical care. Porter received her undergraduate degree from Johns Hopkins University and a Master of Public Affairs from the University of Texas at Austin. Her master’s thesis addressed exploring self employment among formerly incarcerated African Americans. She also studied African Politics at the University of Ghana, West Africa.
-Bernard Harcourt: Bernard E. Harcourt is a distinguished contemporary critical theorist, justice advocate, and prolific writer and editor. In his books, articles, and teaching, his scholarship focuses on social and critical theory with a particular interest in punishment and surveillance.
Harcourt is the founding director of the Columbia Center for Contemporary Critical Thought, which brings contemporary theory to bear on current social problems and seeks to address them through practical engagement including litigation and public policy interventions. He is also the executive director of Columbia University’s Eric H. Holder Initiative for Civil and Political Rights, which sponsors courses, public events, student internships, and fellowships dedicated to strengthening the pillars of all communities—truth, justice, and law.
Harcourt served as a law clerk for Judge Charles S. Haight Jr. of the U.S. District Court for the Southern District of New York. He began his legal career representing death row inmates, working with Bryan Stevenson at what is now the Equal Justice Initiative, in Montgomery, Alabama. He continues to represent pro bono inmates sentenced to death and life imprisonment without parole. In 2019, Harcourt was awarded the New York City Bar Association Norman J. Redlich Capital Defense Distinguished Service Award for his work on behalf of individuals on death row.
Click below to see the event on the Columbia events calendar.
Event link