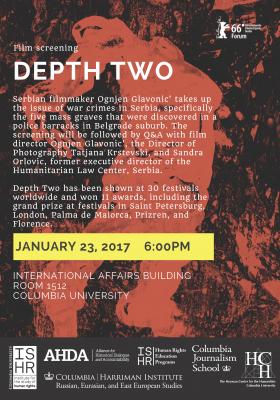 Serbian filmmaker Ognjen Glavonic' takes up the issue of war crimes in Serbia, specifically the five mass graves that were discovered in a police barracks in Belgrade suburb. The screening will be followed by Q&A with film director Ognjen Glavonic' and Sandra Orlovic, former executive director of the Humanitarian Law Center, Serbia.

For six years, Serbian filmmaker Ognjen Glavonić has been researching a hidden event from the war in Kosovo for a fiction feature he is trying to make. While the lack of financing is still preventing him from reaching that goal, the work he has done has resulted in an impressively inventive documentary that world-premiered in the Berlinale's Forum.

In his first feature-length film, Depth Two [+], which recounts an event from the Kosovo war in 1999, when a freezer truck containing the 55 bodies of Albanian civilians killed by the Serbian police and army ran off the road into the Danube near the Serbian-Romanian border, Glavonić uses the testimonies of the perpetrators, witnesses and a victim who survived the massacre by pretending she was dead.

Depth Two has been shown at 30 festivals worldwide and won 11 awards, including the grand prize at festivals in Saint Petersburg, London, Palma de Maiorca, Prizren, and Florence.