The Human Rights Council in the Current Geopolitical Context 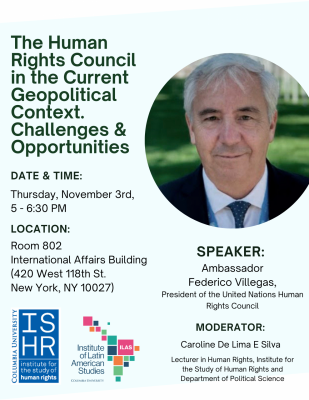 Based on the premise that there is no true peace and security when human rights are absent, and achieving sustainable development requires respect for all human rights, it has become evident that the role of the Human Rights Council – which was designed to promote and protect human rights around the globe – is today more important than ever in our pursuit of a better world for future generations.
Since it began functioning 16 years ago, the Human Rights Council has tackled countless human rights issues worldwide and has kept them in focus while at the same time widening the scope on issues it addresses – both thematic and country situations. The Council has also served as an early warning system by sounding alarm bells on of impending or worsening crises and has been effective in responding to crises – both protracted and emerging – all over the world.
By referring to its different tools and mechanisms, Ambassador Villegas will make the case of the increased relevance of the Human Rights Council at this critical historic moment when we are witnessing the simultaneous occurrence of world shaping events, all of which have huge humanitarian impact and long-lasting consequences: the COVID-19 pandemic (with a weak recovery and the risk of stagflation); climate change and, more recently, the war in Ukraine steaming from the Russian aggression.
Ambassador Federico Villegas is a lawyer and career diplomat. He entered the Argentine foreign service with honours in 1993.
He was appointed Permanent Representative of Argentina to the United Nations Office and other international organizations in Geneva in March 2020, after being Ambassador in Mozambique since 2016. Previously, he was Alternate Representative to the Southern Common Market and the Latin American Integration Association in Uruguay (2008–2011) and Alternate Representative to the Organization of American States in Washington, D.C. (1995–2003), in charge of human rights, cooperation for development and civil society issues.
In Argentina, at the Ministry of Foreign Affairs, he was twice Director General of Human Rights (2005–2007 and 2012–2015).
Mr. Villegas holds a Master of Arts in Liberal Studies, cum laude, from Georgetown University (1998), and was selected as United Nations Disarmament Fellow in 1994 and Young Leader of the Americas in 2004. He undertook intensive training on human rights at New College, University of Oxford (1999) and the International Institute of Human Rights in Strasbourg, France (2001).
During 2020 and 2021, he was President of the 6th Conference of the Arms Convention Treaty (ATT) and Chair of the UNCTAD Trade and Development Board. Since January 2022 he is the President of the 16th Cycle of the UN Human Rights Council.
Contact Information
ILAS
ilas-info@columbia.edu
Click below to see the event on ILAS calendar
Event link