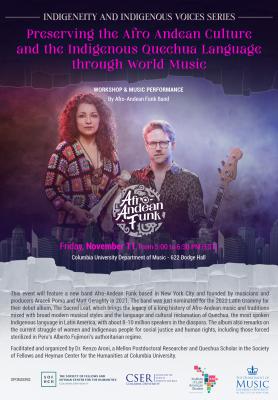 Friday, November 11, 2022 5:00pm–6:30pm EST
Dodge Hall, Room 622, Columbia University
Join The Society of Fellows and Heyman Center for the Humanities for an afternoon workshop and musical performance by Afro-Andean Funk.
This workshop invites participants to engage with the history and music of Peruvian tradition, and will include conversations about cross-cultural collaborations between musicians and the musicalization of traditional Afro-Andean musical instruments that have survived generations. Singer and producer Araceli Poma will bring instruments to share her Andean-Afro roots with participants.
The Peruvian traditional music workshop is followed by a performance by Afro-Andean Funk, a new band based in New York City and founded by musicians and producers Araceli Poma and Matt Geraghty. The band was just nominated for the 2022 Latin Grammy for their debut album, The Sacred Leaf. This debut brings the legacy of a long history of Afro-Andean music and traditions mixed with broad modern musical styles and the language and cultural reclamation of Quechua, the most spoken Indigenous language in Latin America, with about 8-10 million speakers in the diaspora. The album comments on the current struggle of women and Indigenous people for social justice and human rights, including those forced to sterilize in Peru’s Alberto Fujimori’s authoritarian regime.
Facilitated and organized by Dr. Renzo Aroni, a Quechua Scholar and Mellon Postdoctoral Researcher in the Society of Fellows and Heyman Center for the Humanities at Columbia University.
Participants:
Araceli Poma is one of the most representative artists of the new generation of Peruvian musicians. She was nominated before for the 2020 Latin Grammy Awards with the album and documentary “The Warrior Women of Afro-Peruvian Music,” produced by the North American label JUST PLAY. This production poses a defiant challenge to racism, sexism and marginalization through the power of the music and culture of the African diaspora. Her work is defined by her interest in making visible the fundamental contribution of women, challenging racism and marginalization through her music—recovering popular genres of Peruvian music, disseminating the legacy of male and female cultivators of the musical tradition—and, due to her Afro-Andean heritage, betting for the unification and integration of cultures. www.aracelipoma.com
Matt Geraghty is a Latin Grammy nominated multi-instrumentalist and music producer known for his cross-cultural and inclusive musical collaborations in New York and Latin America. In 2018 Matt produced the album and documentary filmed in Peru, “The Warrior Women of Afro-Peruvian Music.” This landmark work was one of the first Afro-Peruvian projects starring women uniting female voices to challenge racism, sexism, and marginalization in Peruvian society. The music documentary was nominated for a Latin Grammy in 2020. Geraghty continued to work with gender-focused music documentaries and during 2020 and 2021, produced “Guerreras Puertorriqueñas,” which focuses on traditional roots music while offering a space for emerging talent in the scene. In late 2021, Matt launched a new project born out of the JUST PLAY series called AFRO-ANDEAN FUNK. www.mattgeraghty.com/
Click below to register
Event link