The Return of Strongmen: India, Turkey, and the U.S. 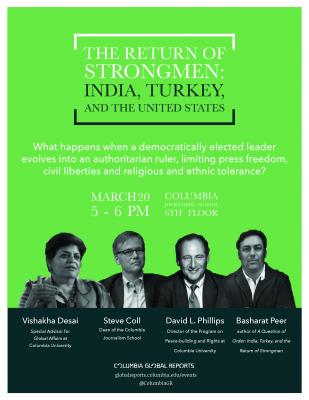 What happens when a democratically elected leader evolves into an authoritarian ruler, limiting press freedom, civil liberties and religious and ethnic tolerance?

Join Columbia Global Reports at Columbia Journalism School for a panel on the current situations in India, Turkey, and the U.S. Moderated by Dr. Vishakha Desai, an Asia scholar with a focus on art, culture, policy, and women’s rights. Panelists will include:

Steve Coll is currently the dean of the Columbia University Graduate School of Journalism. A staff writer for The New Yorker, he served as the president and CEO of the New America Foundation from 2007 to 2012. He is the recipient of two Pulitzer Prize awards, two Overseas Press Club Awards, a PEN American Center John Kenneth Galbraith Award, an Arthur Ross Book Award, a Livingston Award, a Robert F. Kennedy Journalism Award, a Financial Times and Goldman Sachs Business Book of the Year Award, and the Lionel Gelber Prize. From 2012 to 2013, he was a voting member of the Pulitzer Prize Board before continuing to serve in an ex officio capacity as the dean of the Columbia Journalism School.

David L. Phillips is currently Director of the Program on Peace-building and Rights at Columbia University’s Institute for the Study of Human Rights. Phillips has worked as a senior adviser to the United Nations Secretariat and as a foreign affairs expert and senior adviser to the U.S. Department of State. Mr. Phillips is author of An Uncertain Ally: Turkey under Erdogan's Dictatorship (2017), From Bullets to Ballots: Violent Muslim Movements in Transition (2008), Losing Iraq: Inside the Postwar Reconstruction Fiasco (2005), Unsilencing the Past: Track Two Diplomacy and Turkish-Armenian Reconciliation (2005). He has also authored many policy reports, as well as more than 100 articles in leading publications such as the New York Times, Wall Street Journal, Financial Times, International Herald Tribune, and Foreign Affairs.

Dr. Vishakha Desai currently serves as Senior Advisor for Global Affairs to the President of Columbia University and Senior Research Scholar at its School of International and Public Affairs. She also serves as Senior Advisor for Global Programs to the Solomon R. Guggenheim Foundation and is President Emerita of the Asia Society (2004 – 2012). In recognition of her leadership in the museum field, President Barack Obama appointed her to serve on the National Commission on Museums and Libraries in 2012. She is a recipient of five honorary degrees from Centre College, Pace University, the College of Staten Island, Susquehanna University, and Williams College.