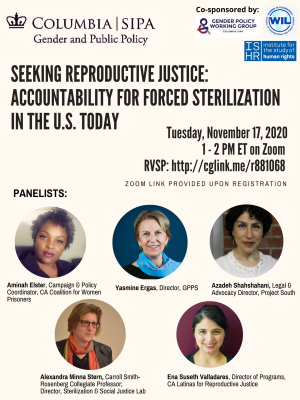 Join us for an exciting panel discussion on seeking reproductive justice and accountability for forced sterilization in the United States. We will hear from leading activists and scholars working to establish accountability for survivors of forced sterilization. From working to shutdown ICE Irwin Detention center, to passing legislation to get reparations for survivors in California prisons, you will hear about the latest efforts in this fight!

RSVP is required.
This event is moderated by Yasmine Ergas, Director of the Gender and Public Policy Specialization. We are honored to be joined by the following panelists:
Alexandra Minna Stern, Carroll Smith-Rosenberg Collegiate Professor, American Culture, History, and Women's and Gender Studies;
Director, Sterilization and Social Justice Lab
Alex is the Carroll Smith-Rosenberg Collegiate Professor in the Department of American Culture at the University of Michigan. She also holds appointments in the Departments of History, Women's Studies, and Obstetrics and Gynecology, and directs the Sterilization and Social Justice Lab, an interdisciplinary, multi-institutional research team that is reconstructing and analyzing the history of eugenics and sterilization in four U.S. states (Michigan, North Carolina, Iowa, and California). Alex's research focuses on the history of eugenics, genetics, society, and justice in the United States and Latin America. She is the author of the award winning book, Eugenic Nation (2005), and her most recent book is Proud Boys and the White Ethnostate (2019).
Aminah Elster, Policy and Campaign Coordinator, California Coalition for Women Prisoners
Aminah Elster is a proximate leader and scholar whose work focuses on gender violence, critical acts of survival, and the carceral system. She founded Unapologetically HERS (Healing Experiences through Research Solutions), an organization committed to centering and empowering the experiences of those incarcerated within California women's prisons through leadership development and self sufficiency, and advocates for the abolition of carceral systems. She received her BA in Legal Studies from UC Berkeley and is the co-author of Criminal Record Stigma in the College-Educated Labor Market, Aminah serves as an advisor to Voice of Witness and the San Francisco District Attorney’s Justice Impacted Board. She is currently the Policy and Campaign Coordinator with the California Coalition for Women Prisoners in Oakland, CA.
Ena Suseth Valladares, Director of Programs, California Latinas for Reproductive Justice
Ena Suseth Valladares has worked on reproductive justice issues for nearly 15 years, primarily working on reducing health inequities and improving access to social and health services through community-informed research and policy.
Azadeh Shahshahani, Legal & Advocacy Director, Project South
Azadeh has worked for a number of years in the U.S. South to protect and defend immigrants and Muslim, Middle Eastern, and South Asian communities. She previously served as president of the National Lawyers Guild and as National Security/Immigrants’ Rights Project Director with the ACLU of Georgia. She is the author or editor of several human rights reports, including a 2017 report titled “Imprisoned Justice: Inside Two Georgia Immigrant Detention Centers,” as well as law review articles and book chapters focused on racial profiling, immigrants’ rights, and surveillance of Muslim-Americans. Her writings have appeared in the Guardian, the Nation, MSNBC, USA Today, Aljazeera, and HuffPost, among others. Azadeh is the recipient of the Shanara M. Gilbert Human Rights Award from the Society of American Law Teachers, the National Lawyers Guild Ernie Goodman Award, the Emory Law School Outstanding Leadership in the Public Interest Award, the Emory University MLK Jr. Community Service Award, the US Human Rights Network Human Rights Movement Builder Award, the American Immigration Lawyers Association Advocacy Award, among several others. She has also been recognized as an Abolitionist by the Antiracist Research and Policy Center at American University & the Frederick Douglass Family Initiatives.
Click below to register
Event link