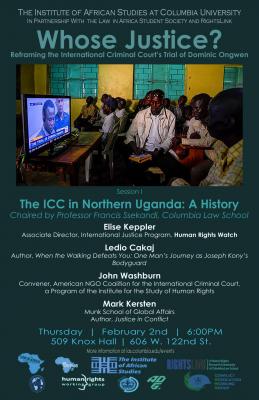 On December 6, 2016, the International Criminal Court (ICC) commenced its trial of Dominic Ongwen, a former top-ranking commander in the infamous Ugandan rebel group known as the Lord's Resistance Army (LRA). While Ongwen's case is by no means the first trial to come before the ICC, it is certain to carry considerable symbolic weight for the Court.

Dominic Ongwen is facing 70 counts of war crimes and crimes against humanity - more than ten times the average number of charges brought against other defendants at the ICC. Yet Ongwen (now approximately 40 years old) was abducted into the LRA as a minor - making him not only a perpetrator of war crimes, but also a victim. His trial is unprecedented in that it marks the first time the ICC has ever prosecuted a former child soldier. Of the commanders indicted by the ICC, Ongwen is the only one who did not join the LRA of his own volition - yet he is the only one likely to ever see trial. Ongwen's case raises a wide range of questions about culpability in conflicts involving child soldiery, the rights of civilian victims, and the efficacy of international justice mechanisms. As such, it provides fertile ground for discussion and debate.

This semester, IAS will explore these issues, and more, in a two-part symposium examining the history and complexities of Ongwen's trial.

SESSION I OF THE SYMPOSIUM will feature Human Rights Watch's Elise Keppler, as well as independent researcher (and author of When the Walking Defeats You) Ledio Cakaj, John Washburn of the American Non-Governmental Organizations Coalition for the ICC, and Columbia Law School's Francis Ssekandi.

The discussion will introduce Ongwen's case, covering both the history of the Lord's Resistance Army and the history of the International Criminal Court's involvement in northern Uganda, while also touching on Uganda's Amnesty Act, the Juba Peace Process, and other past attempts to bring stability and justice to areas affected by the LRA.