A new paper by ISHR Instructor Daniella Ikawa
Monday, May 8, 2017

Daniela Ikawa, an instructor with ISHR, recently published a paper titled Building Pluralism Through Affirmative Action in Brazil: The Case for Education that examines changes in Brazil's national identity in regards to race and the resulting affirmative action programs. Read the brief description below:

Along with many other Central and South American countries, Brazil has long viewed itself as a society characterized by a single “cosmic race” formed through the mixing of indigenous peoples, former African slaves and European settlers. Until the 1990s, government policy often denied the existence of racial prejudice or racial inequalities. Over the last quarter century, however, Afro-Brazilians have been able to unveil racial discrimination and prejudice and have it acknowledged and addressed. Beginning in the 1990s, race-conscious policies have been introduced, including the collection of statistics on a racial basis and the adoption of race-based forms of affirmative action. These commitments have continued to evolve, resulting in the adoption of important 2012 legislation that requires federal universities to institute quotas for admission. In Brazil today, this narrative of a racialized and unequal society has both supporters and critics. Brazil’s shifting narrative—from “racial democracy” to a racialized and unequal society—raises several questions about affirmative action as a remedy for group-based inequalities.  What lessons can we learn from the Brazilian case about the role of identity and recognition in addressing group-based inequalities and about the resistance to pluralism that these changed conversations imply?

Ikawa participated in a panel discussion on the project on March 30, 2017.

Ikawa teaches Introduction to Human Rights and Equality, Identity and Rights in the Human Rights Studies M.A. Program. She is also the Coordinator of the Working Group on Strategic Litigation at the International Network for Economic, Social and Cultural Rights in New York. 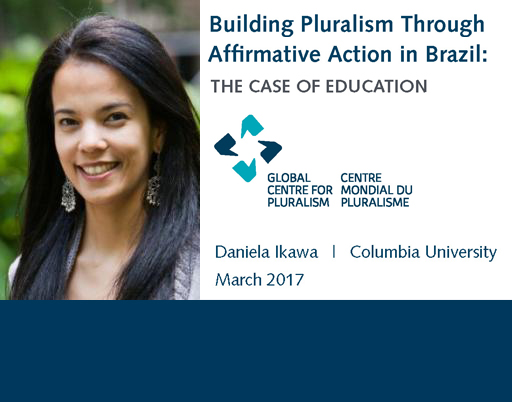