Congratulations to Elsa Stamatopoulou, director of the Indigenous Peoples' Rights Program at ISHR, who was selected as one of the United Nations Leading Women from 1945 to 2016.

Before joining ISHR in 2011, Elsa served 22 years at the UN focused on human rights and Indigenous issues. She became the first Chief of the Secretariat of the United Nations Permanent Forum on Indigenous Issues in 2003 and oversaw the first edition of the UN publication State of the World’s Indigenous Peoples in 2009.

Elsa received the nomination from the Group of Friends for Gender Parity at the UN. The women being honored are featured in HERstory, an exhibit taking place at UN Headquarters in NY from December 12 - 23, 2016.

Elsa has received The Ingrid Washinawatok El Issa O’Peqtaw Metaehmoh-Flying Eagle Woman Peace, Justice and Sovereignty Award; the award of the NGO Committee on the Decade of the World’s Indigenous Peoples; the Eleanor Roosevelt Award of the Human Rights Center and of Voices 21 and others; in 2010 the Museum “Tepee of the World” was given her name in the Republic of Sakha, Siberia, Russia. Her writings include articles on indigenous rights, women’s rights, victims of human rights violations, cultural rights and on the UN; in 1998, she co-edited, with Danielli and Diaz, “The Universal Declaration of Human Rights: 50 Years and Beyond”; her book “Cultural Rights in International Law” was published in 2007 by Martinus Nijhoff Publishers. She oversaw the first edition of the UN publication State of the World’s Indigenous Peoples, New York, 2009. 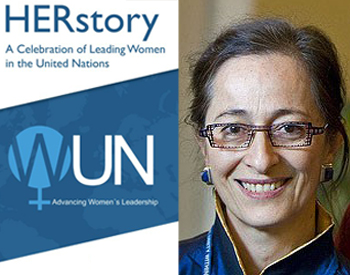