On April 3, 2009 Advocate Karyn Kaplan spoke on “Strengthening Civil Society and Community-Based Organizations in Asia” at Columbia University in a dialogue sponsored by the Human Rights Advocates Program (HRAP), and the Columbia University School of International and Public Affairs (SIPA) Economic and Political Development Concentration. Karyn’s talk served as the second feature for HRAP’s 30-Year Anniversary (1989-2019) Alumni Speaker Series. Karyn currently works as the Executive Director for Asia Catalyst, an organization that “builds strong civil society and advances the right to health for marginalized groups in Asia [by training] leaders of community-based organizations to run effective, sustainable, and democratic organizations, and to conduct rigorous human rights research and advocacy.”

Karyn began her discussion by describing her professional development in human immunodeficiency virus/acquired immunodeficiency syndrome (HIV/AIDS) advocacy explaining how her background as a volunteer in Thailand informed her advocacy work in the United States during the early 90’sat Gay Men’s Health Crisis and eventually her appointment as Executive Director of Asia Catalyst.

“As an AIDS activist [working alongside people living with HIV and AIDS over many years in Thailand]… [I] really [saw] how people affected by the disease were so critical and brave and in need of support [and] allies and so everything I do at Asia Catalyst with the staff there is about the very same principles of participation, self-representation, addressing structural issues, [and] legal and social issues.”

Following her introduction, Karyn then presented Asia Catalyst, starting with an anecdote about the founding of the organization by a colleague from Human Rights Watch who had the original goal of responding to HIV-related discrimination in China, including by helping to establish a legal aid clinic there. For over 12 years in China, Asia Catalyst trained more than 200 grassroots leaders to do rights advocacy and establish their own organizations, mainly focused on health-related rights.

“Asia Catalyst is really about supporting grassroots groups through capacity building around human rights, [teaching] the human rights framework, how to use [human rights], [documenting] human rights, having skills in documentation, and then coming up with creative advocacy strategies... Not only providing those kinds of skills, [and also focusing on] leadership building.”

Karyn continued by elaborating on the methodology of Asia Catalyst’s capacity building approach consisting of a “Know It, Prove It, Change It” human rights curriculum on documentation and advocacy, a “Nonprofit Survival Guide,” and using these materials in a year-long training for leadership cohorts. The curriculum Asia Catalyst uses has supported over 250 groups across China and Southeast Asia. They also focus on Myanmar and provide to groups in neighboring countries, despite increased government crackdowns on civil society in the region. The Nonprofit Survival Guide provides methods of sustainable advocacy including strategic plan design, social media, networking with allies, and other features organizations may need experience with. The leadership cohort selects individuals from unique eligibility criteria to go through skill-building training for leadership, effective advocacy, coalition building and seed-grant support.

A complex conversation about government crackdowns on foreign non-governmental organizations, focusing on Asia Catalyst’s experience trying to legally register in China, followed Karyn’s discussion of methodology. She commented on how the backlash on issues especially related to Lesbian, Gay, Bisexual, and Trans (LGBT) advocates and other marginalized or criminalized groups has led to a shrinking of civil society spaces through increasingly restrictive institutional registration processes and access to funding for grassroots groups.

“[We] have been struggling with how are we going to maintain [connections among] our global advocacy community because there is so much synergy that goes on between [our] different communities[ – essential sharing of] lessons about [the] struggle to survive to continue improving the lives of the peers and communities that you are working with – and things are only getting worse.”

Karyn concludes on a proactive note sharing how Asia Catalyst continues to generate impact despite these challenges by cross-fertilizing regional coalitions to encourage organizations to come together and share experiences of success. Trusting relationships and networking, Karyn described as she launched into a Q&A with the audience, creates productive partnerships to promote a diverse civil society where organizations can broker relationships, leverage resources, and build on value-added for others who have less access. Karyn responded to one inquiry stating that the “million-dollar question” remains to be whether the laws governing non-governmental organizations will become more or less strict in the region and impede the flourishing of civil society in the future. She said that she remains hopeful though, inspired by groups like PFLAG (Parents and Friends of Lesbians and Gays) in China who have successfully engaged elder communities to help overcome stigma and discrimination for their gay children. The final inquiry in the question and answer period asked Karyn is she had any advice for Columbia students soon to be professionally active in international affairs, to which she said the most important factor is:

“Passion… if you don’t have that, everything else is going to just grind you down and so you have to really want to be working on something [and] be open to things that you might not expect, they can also turn into great experiences.”

Karyn's bio can be found on the ISHR website at http://humanrightscolumbia.org/hrap/advocates, and more information about Asia Catalyst can be found at http://asiacatalyst.org/.  — Nicholas Perez 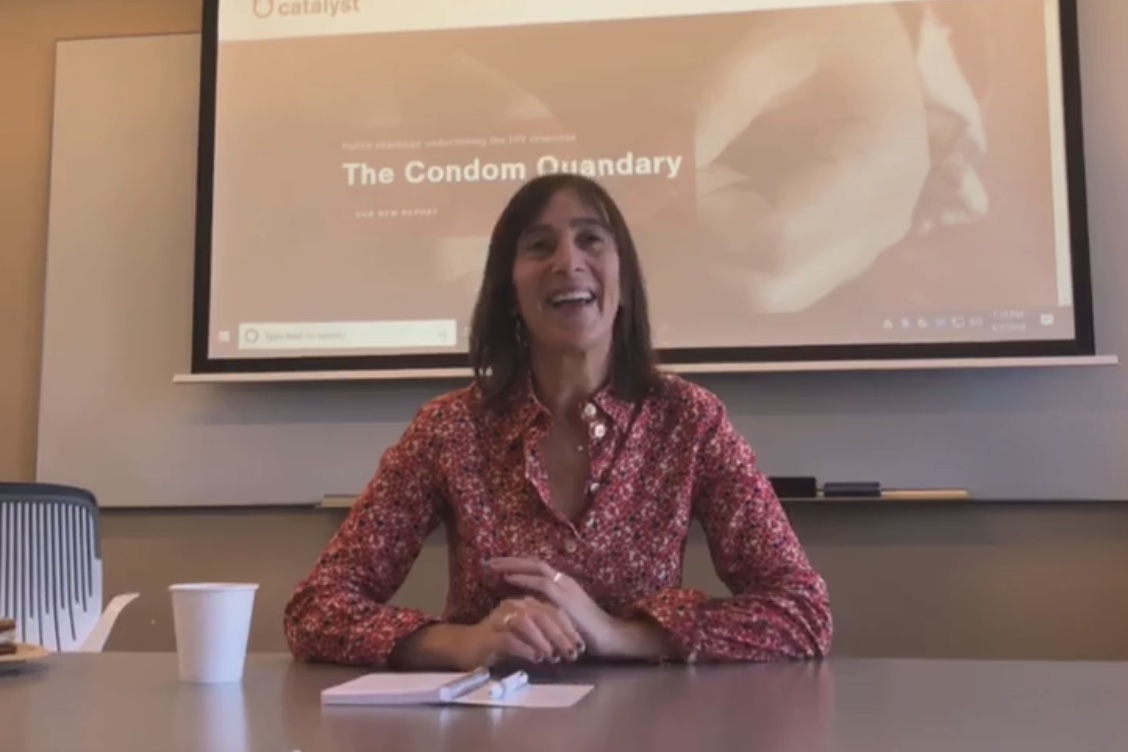