Saturday, June 20 is World Refugee Day, honored by the United Nations to raise awareness and educate the public about refugees, their basic rights, their situation around the world, and the responsibilities of states to grant them asylum.

The spontaneous protest movement that has engulfed the United States, after millions of people watched in horror as officers of the state murdered a defenseless man, speaks to the violence and disenfranchisement familiar to most refugees. They, too, have often personally faced state violence in their former homes and they understand what it means to fear police who kill for no reason and to be forced to run for their lives.

The United Nations set out almost seventy years ago to construct a system supported by states that provides a way to seek refuge from discrimination and that respects everyone’s basic humanity. However, the US carceral and legal system has many branches that turn both citizens of color and asylum seekers into adversaries of the state. Refugees in this country confront institutions which are riddled with racist policies, presume guilt, and apply principles unevenly. In recent days, protestors and legislators have focused on defunding the police, but this is not the only institution that perpetuates state violence and discrimination. It is also prevalent in many others that we should examine on World Refugee Day.

The United States was not a signatory to the 1951 Convention Relating to the Status of Refugees, which first defined “refugees” in international law and outlined their rights and the obligations of states to protect them. The country recognized refugees’ distinct needs only when it acceded to the 1967 Protocol, which lifted the temporal and geographic restriction of the 1951 Convention so that it would apply to everyone around the world. In practice, the United States has demonstrated an uneven commitment to the treaty and has denied the rights of some populations almost entirely.

In the 1980s, when the US government was supporting authoritarian regimes in Central America, refugees arriving at the southern border were not offered asylum. In 1984, for example, only three percent of Salvadoran and Guatemalan applicants were granted asylum, which led to the original Sanctuary movement, in which American churches defied the government and provided shelter to Central American refugees. This followed the passing of the 1980 Refugee Act, which sought to establish a regular system of resettlement and immigration for refugees, raised the annual ceiling on the number of refugees admitted, and harmonized the definition of a refugee in US law with UN standards.

Recently, the United States has continued to ignore its legal obligations and responsibilities laid out by the United Nations to those lawfully seeking asylum. Refugees face racism, violence, and discrimination during each stage of their journey to find refuge: in their travels to reach the United States, at the militarized southern border, while in the custody of Homeland Security agents, and as they go through the asylum system that legally should protect them and their rights. The images of adults, children, and even babies huddling in the frigid “iceboxes” (hieleras) of migrant detention facilities are only one example of the state crimes for which no one has been held accountable.

Today people are dying on both sides of the United States-Mexico border, often in unmarked graves far beyond the reach of public scrutiny. The activism of recent weeks is credited with returning much-needed attention to the border. Jamila Nabunjo, a young Ugandan asylum seeker who died in Mexico last September, was finally given a proper burial this month after a nine-month delay only as a result of the relentless advocacy of Edith Tapia, a policy analyst with The Hope Border Institute, who raised the threat of public protests against the racism of Mexican authorities. “Without the current context and awareness about Black Lives Matter,” Tapia said, “Nabunjo’s body would not have been released.”

Jamila was a victim of one of the tragic “non-arrival” policies administered by the US government in recent years. The most detrimental of these is the Migrant Protection Protocols (MPP), a Homeland Security policy implemented last year which forces asylum seekers entering the United States at the southern border to return to Mexico while waiting for their hearings. During this waiting period, refugees often face many of the conditions they fled: violence, sexual assault, kidnappings, housing insecurity, and a lack of access to healthcare.

These problems facing refugees have been exacerbated during the pandemic, as closures of immigration courts have lengthened wait times for asylum hearings. In April, twenty-seven faith-based, community, and humanitarian organizations wrote to Homeland Security officials asking them “to immediately end MPP and parole these individuals into the United States where they can securely shelter” during the pandemic while they await the reopening of the courts. “MPP imperils the safety of men, women, and children,” their letter argued. According to the U.S. Immigration Policy Center, about 92 percent of asylum applicants at the southern border have close friends or family members in the United States, so MPP also constitutes one of several tactics used by the Trump administration to keep families separated. These “deterrence” mechanisms seek to inflict suffering as a “message” to prevent people from trying to reach the United States. This flawed logic is not only inhumane but also illustrates a fundamental misunderstanding of the steps those fleeing violence and persecution will take to find safety and reunite with loved ones.

Even when refugees are admitted to the United States, they face the same brutal police system that claims the lives of over one thousand people annually and disproportionately imprisons people of color. But refugees also face another patchwork of racist law enforcement institutions, which include the infamous agency known as Immigration and Customs Enforcement (ICE). Created in 2003 as a branch of the Department of Homeland Security (DHS), its purpose was ostensibly to prevent terrorists from entering the country through the immigration system, but it operates in ways eerily similar to the police in its unchecked use of force and draconian methods for which there has been no accountability.

Over two hundred people have died in ICE custody since 2004, including eight people already this year. ICE detainees are suffering “horrifying neglect” during the pandemic, and ICE raids around the country have led immigrant communities to live in fear “every time someone knocks” at the door. Federal Judge Jed Rakoff recognized the “capricious manner” of ICE operations in his recent decision ordering the agency to stop arresting undocumented immigrants in or near courthouses. Nationwide calls to abolish ICE started gaining momentum in 2017, and they must be reconsidered as the nation revisits policing more broadly.

Custody in an ICE detention facility often leads to deportation, a policy that a recent study by political geographer Nancy Hiemstra finds only produces more violence. In Detain and Deport, Hiemstra follows deported individuals back to Ecuador, observing that the “experiences of detention and deportation are not contained by detention facility walls or by national borders, and these policies bolster human smuggling networks as well as create local insecurities and instability that can galvanize new migration.”

Further, asylum seekers who manage to access the US asylum system confront an uneven application of principles, directly motivated by prejudice and discrimination. In an aptly titled book, Refugee Roulette, one can see the disparities in the asylum adjudication process. Authors Philip G. Schrag, Andrew I. Schoenholtz, and Jaya Ramji-Nogales reveal that asylum granting rates vary considerably by the “refugee-producing country” (RPC) and the background of the judge overseeing the hearing. Judges with work experience in the military or immigration enforcement grant asylum at lower rates than those with a background in academia or non-governmental organizations. There was a gender divide as well: female judges granted asylum in 53.8% of cases, versus 37.3% for male judges.

There has been increased criminalization of humanitarian activities to aid asylum seekers and immigrants under the Trump administration. For example, the charges of “harboring undocumented migrants” that were filed against human rights activist Scott Warren of No More Deaths—for giving food, water, and shelter to two individuals in the Arizona desert—are part of a policy to conflate humanitarian work with trafficking. Ultimately, Warren was acquittedby a federal jury of felony charges, and the US Attorney’s Office dismissed a misdemeanor charge earlier this year. But the federal prosecutor still vowed to “continue to prosecute those who intentionally help illegal immigrants evade law enforcement detection while deceptively cloaking their illegal acts as ‘humanitarian aid.’”

Those charges should have never been filed in the first place. They were reminiscent of similar charges filed by the Department of Justice against members of the original Sanctuary movement in the 1980s, which had been infiltrated by agents of the former Immigration and Nationality Service (INS) in a plot called “Operation Sojourner.” Although defendants appealed in the case of United States v. Aguilar to the protections of the 1967 Protocol Relating to the Status of Refugees, the Ninth Circuit Court of Appeals rejected any “supposed international law obligations,” concluding that “the Protocol is not a self-executing treaty having the force of law.” Nevertheless, the defendants all received probation, the federal government faced public backlash, and a class-action discrimination lawsuit against federal immigration authorities was settled not long after, securing asylum for many refugees from Guatemala and El Salvador.

Outspoken activists who fight for the rights of asylum seekers and immigrants are often the subject of extreme scrutiny by US government agents. New Sanctuary Coalition Executive Director Ravi Ragbir, who immigrated to the United States from Trinidad in 1991, has been targeted by ICE with repeated “check-ins,” detention, and threats of deportation. “Ragbir’s public expression of his criticism, and its prominence, played a significant role in the recent attempts to remove him,” the Second Circuit Court of Appeals ruled last year. “The government’s retaliation was egregious.” Activists and lawyers with immigrant rights groups such as Al Otro Lado have been prevented from crossing the border into Mexico. And the government has been keeping dossiers on journalists and activists helping asylum seekers and migrants.

Criminalizing humanitarian work makes demands for refugees’ and immigrants’ fundamental rights seem unreasonable. It also costs lives. Agnes Callamard, the UN Special Rapporteur on extra-judicial, summary or arbitrary executions, outlined the consequences of these policies in a 2018 report, Saving lives is not a crime. “[B]y obstructing the provision of life-saving services and criminalizing acts of solidarity, States are violating normative pillars of international human rights and humanitarian law,” Callamard’s report argues. “What follows are arbitrary deprivations of life under the convenient banners of fighting terrorism, combating smuggling or guarding social mores.”

This is a grim World Refugee Day. While there are over seventy million people around the world who have been forced to leave their homes, the United States government’s annual refugee resettlement ceiling is at a historic low of 18,000, down from 231,700 in 1980. The appeals for real structural change must expand beyond rethinking policing in America. The movement for racial justice and legal equality must also include reform of the institutions that affect refugees and asylum seekers.

Rebecca Kobrin is the Russell and Bettina Knapp Professor of American Jewish History at Columbia University. 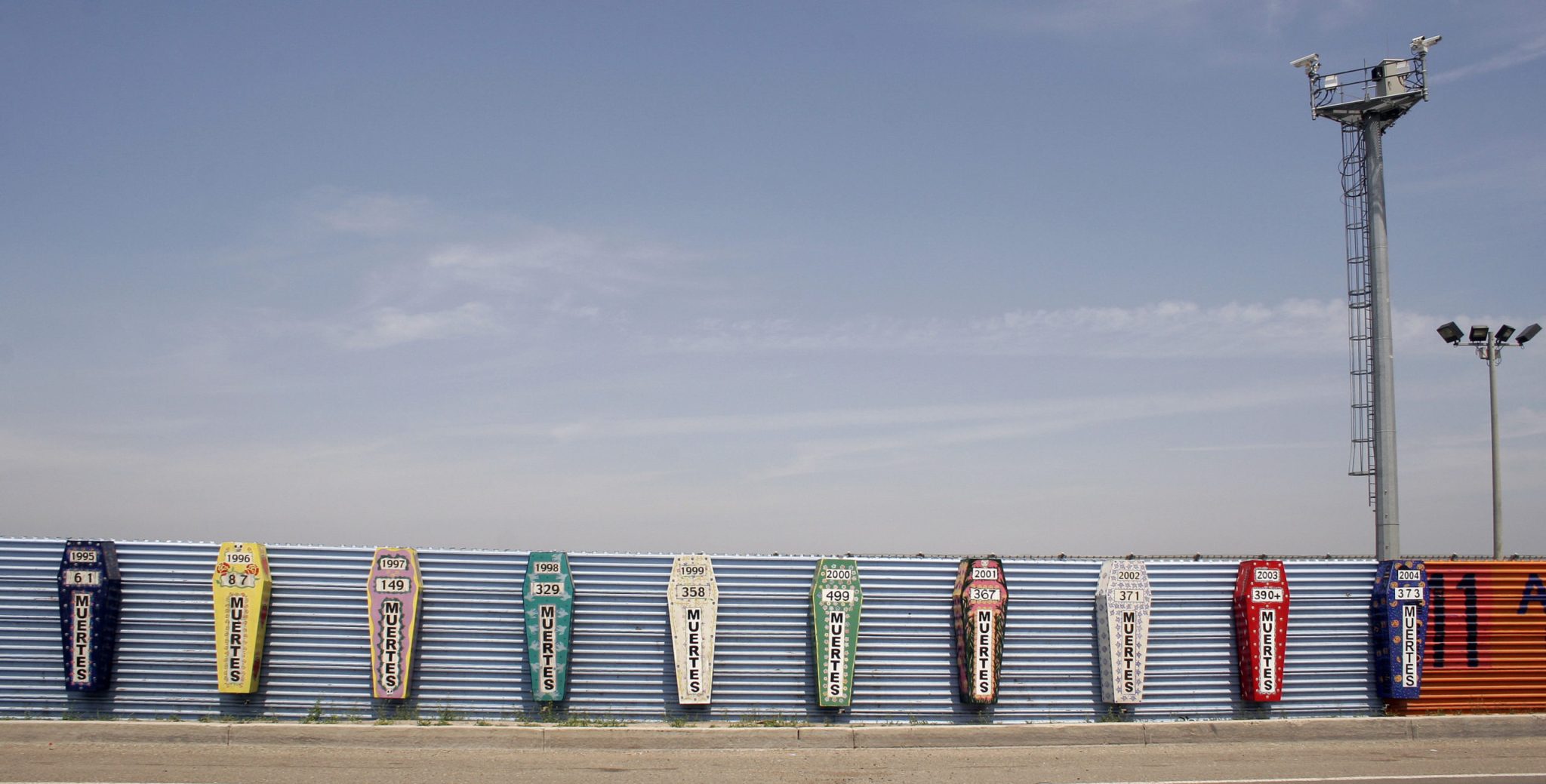