President Donald J. Trump succumbed to Turkey’s demand for a “safe zone” in North and East Syria, announcing overnight that the U.S. is pulling back forces that have served as a trip wire deterring Turkey’s invasion. The pullback reverses years of U.S. policy, ignoring advice from the Pentagon and State Department. Trump’s decision is strategically flawed, tactically incoherent -- and morally repugnant.

More than 11,000 Kurdish fighters have died fighting ISIS in North and East Syria at America’s behest, and 22,000 more were wounded. Kurds were America’s boots on the ground fighting the ISIS caliphate in Syria.

U.S. cooperation with the Kurds dates back to the fall of 2014 when the Pentagon provided weapons and air support to the People’s Protection Units (YPG) and the Women’s Protection Units (YPJ) to defeat ISIS in Kobani. Since then, the Kurds defeated ISIS in Tell Abyad, the border crossing used by Turkey to supply its jihadist proxies in a Syria. Kurds were the point of the spear, liberating the capital of the ISIS caliphate in Raqqa. In March 2019, Kurds defeated ISIS in Baghouz, destroying its last sanctuary in Syria, after weeks of intense fighting.

Abandoning the Kurds, America’s only ally in Syria, will result in a bloodbath. Turkey’s President Tayyip Erdogan has pledged to cleanse Kurds and make way for refugees to resettle in Syria.

As we have seen in Afrin, which Turkey decimated in January 2018, heroic and highly motivated Kurdish defenders are no match for Turkey’s air power, armor, and criminal proxy, the Free Syrian Army.

The ISIS caliphate may be destroyed, but ISIS is far from defeated. U.S. Special Forces were relying on their Kurdish allies to keep the pressure on ISIS.

Thousands of ISIS fighters have been detained by the Kurds. As Kurdish fighters redeploy to counter Turkey’s aggression, ISIS detainees will escape and rejoin their Turkish compatriots.

U.S. Special Forces have already abandoned observation posts in Tell Abyad and Ras al-Ayn. Without U.S. protection, the Kurds have no place to turn for protection except the Syrian regime and Russia. As a result, America’s position in Syria will be further marginalized as we enter the political and military end-game of Syria’s civil war.

Washington’s precipitous withdrawal will destroy multilateralism, causing France and Britain, who support the Kurds, to pull back their forces. U.S. allies are dismayed by Trump’s decision to abandon a year’s worth of negotiations aimed at managing relations between Turkey and the Kurds, which kept Turkey’s invasion at-bay.

The flight of Kurds will destabilize Iraq, which is struggling with domestic unrest. Iraqi Kurdistan already hosts hundreds of thousands of displaced persons from the war in Syria and sectarian conflict in Iraq.

As we saw in Kobani, Turkish Kurds will protest Turkey’s invasion and war crimes. Resulting unrest risks civil war in Turkey. Violence will occur in Turkey’s Southeast, where Kurds predominate, Hatay Province along Turkey’s border with Syria, as well as Istanbul, home to more than one million Kurds.

Trump’s wrong and short-sighted decision not only betrays the Kurds. It discredits the United States to partners in the worldwide fight against ISIS. Who will fight and die for the United States the next time we need friends to counter violent extremism?

David L. Phillips is Director of the Program on Peace-building and Human Rights at Columbia University’s Institute for the Study of Human Rights. He served as a Senior Adviser to the U.S. State Department during the administrations of President Clinton, Bush and Obama. His most recent book is The Great Betrayal: How America Abandoned the Kurds and Lost the Middle East (Bloomsbury). His forthcoming book is titled Front Line Syria: A Political and Military History of the Civil War (Bloomsbury).

Questions About the "Coup" in Turkey
David
Phillips
Tuesday, August 13, 2019

US Must Draw Red Line at Sudan's Tipping Point to Avoid Another Round of Atrocities
David L.
Phillips
The Globe Post
Wednesday, July 3, 2019 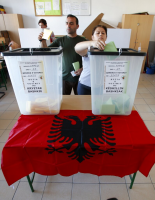 The United States—and many other wealthy nations—are facing an invisible but profound crisis of sanitation coverage that disproportionately affects poor and rural communities.

The United States has adopted a Water for the World Act and a Global Water Strategy. Together they recognize the importance of Water, Sanitation and Hygiene (WASH) and prioritize resources for countries including Ethiopia, Haiti, and Indonesia. Unfortunately, these policies reflect US exceptionalism par excellence: the long standing (and long discredited) idea that socio-economic rights, while relevant in other parts of the world, have little place shaping policy in the United States. Though the stated goal is to “leave no one behind” these programs have no domestic complement. By failing to meet the needs of its own residents, the US is entrenching the marginalization of disadvantaged communities. This reflects a broader global context in which water and sanitation are predominantly envisaged as concerns in the global South. This is a false premise that unfortunately leads decision-makers, engineers, and funders to ignore the lack of adequate sanitation and wastewater that spans the global North, including in Sweden, Canada, and Slovenia, among other countries.

The US is generally assumed to have universal sanitation coverage but is actually facing an invisible yet profound crisis. In 2017, the American Society of Civil Engineers gave the United States a D+ grade for its national wastewater infrastructure. While there is no accurate and comprehensive data, a recent studyestimates that 540,000 households lack complete plumbing. As a result, many individuals endure chronic exposure to feces, environmental contamination, and diseases such as hookworm.

It is true that most people across the United States have the privilege to flush and forget. However, inadequate, failing, and non-existent sanitation infrastructure plague many rural households. Communities marginalized on the basis of socio-economic, racial, ethnic, and indigenous identity bear a disproportionate burden. Sewage and feces flow into backyards and back up into living rooms. At a recent briefing in the US Congress, California resident Ralph Pierro II explained how residents in the community of Weedpatch have resorted to filling plastic bags with their feces rather than using their toilets because the ground becomes boggy due to failing systems.

The outcome is a picture of extreme inequalities in the enjoyment of the right to sanitation. At the briefing, Nina McCoy explained that in Martin County, Kentucky, poor system design and installation leaves an entire community behind. A flawed sewage system has hooked up only 20% of the homes and this small number of users cannot afford to sustain the system, let alone address the initial design flaws. Deep disparities often exist in close proximity. National census data from 1990 indicates that in Lowndes County, Alabama, 10.5% of black households lacked full plumbing while only 0.4% of white households did. Comprehensive data has not been collected more recently.

These are not isolated instances. As our recent report Flushed and Forgottendocuments, the sanitation crisis is nation-wide. The report provides snapshots of disparities in Alabama, Alaska, California, Kentucky, Louisiana, Michigan, Mississippi, the Navajo Nation, North Carolina, Ohio, Texas, Virginia, West Virginia, and Puerto Rico—and it is just scratching the surface. Similar circumstances exist in Florida, New York, and Minnesota.

Yet, all too often discussions of the sanitation crisis focus solely on the global South, as is evident in the Water for the World Act. When discussions elide the reality that the problem is universal, they reinforce a false perception separating the global North and global South. The conditions in Weedpatch, California, bear striking similarity to the infamous “flying toilets” of Kibera. And when these are characterized as “global South conditions”, we fail to acknowledge the avoidable, inexcusable, deep-seated inequalities in the global North. The US has the resources to improve wastewater infrastructure, but at present neglect and disinvestment are the defining features of the domestic approach, coupled with deliberate exclusion. These are, in fact, global North conditions.

In rural communities, on-site systems are common—and often costly. Yet, state and local laws place the financial burden of wastewater solutions on those most in need. When residents cannot afford these systems, they resort to straight-piping—makeshift channels that run sewage from homes to yards and ditches. Because straight-piping does not comply with regulations, homeowners often face fees, fines, and even criminal penalties, compounding cycles of poverty and marginalization and fueling distrust in public authorities.

Calls to improve WASH often elicit the response that it is too much to take on, followed by the question “can we really afford to provide sanitation services for everyone?” The question we ask is how can we afford not to? The human, environmental, and health impacts of inadequate sanitation have tremendous costs—in lives and in dollars. As one of the wealthiest countries in the world, the United States has the resources and the capacity to address this crisis. Political will has long been lacking, but there are some recent glimmers of hope. National leaders have begun to acknowledge the crisis and target federal funding for small systems to address the need in rural communities. This is necessary, but insufficient for the structural change required to eradicate the sanitation crisis.

While the US presidential administration disengages from the international human rights arena, civil society groups, elected officials, and companies increasingly recognize the human right to sanitation. Operationalizing this right will require a paradigm shift, which upends the notion that individuals should bear sole responsibility and holds government accountable to human rights standards. A new approach requires:

The human rights framework focuses on eliminating the underlying structural causes of sanitation and wastewater failures. While soil conditions, geography, and infrastructure play an obvious role in access to sanitation, the most significant barrier is the lack of political will. The Water for the World Act emphasizes “The United States should be a global leader in helping provide sustainable access to clean water and sanitation for the world’s most vulnerable populations.” We could not agree more. It is time to lead by example with a strategy that addresses the needs of marginalized communities throughout the US.

Inga Winkler is a lecturer, researcher and advocate at the Institute for the Study of Human Rights at Columbia University and has been working on the human rights to water and sanitation for more than a decade. Find more information on her work here and follow her on Twitter.

Winkler is one of the co-authors of the recently published report Flushed and Forgotten: Sanitation and Wastewater in Rural Communities in the United States.

JoAnn Kamuf Ward is the Director of the Human Rights in the US Project at the Columbia Law School Human Rights Institute and a Lecturer In Law. She uses human rights standards and strategies to tackle discrimination and advance racial, gender, and ethnic justice at the local and federal levels in the United States.

Kamuf Ward is one of the co-authors of the recently published report Flushed and Forgotten: Sanitation and Wastewater in Rural Communities in the United States.

"The Stealing of an Election in Istanbul
David L.
Phillips
Newsday
Friday, June 21, 2019