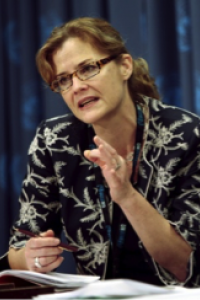 Dr. Goetz joined NYU’s Center for Global Affairs in January 2014, where she teaches International Relations and Comparative Politics.  She is both an academic and a policy-maker.  She was a Fellow at the Institute of Development Studies at the University of Sussex between 1991 and 2005, and she worked for the United Nations in Africa (Chad and Guinea) in the mid-1980s and at the UN’s New York headquarters between 2005 and 2014, as UNIFEM and UN Women’s Chief Advisor on Peace and Security.  Dr. Goetz spearheaded initiatives to promote women’s empowerment in the UN’s peacebuilding work, supported changes in peace-making and peacekeeping practice to ensure women’s participation in peace talks and post conflict elections, and promoted policy changes to enable better protection of women from violence.   Dr. Goetz was instrumental in producing the content and supporting negotiations for Security Council resolutions on women’s participation in peacebuilding, conflict-related sexual violence and women’s leadership in conflict resolution.

Professor Goetz is the author of eight books on the subjects of gender and politics in developing countries, gender and institutional change, and public sector accountability reforms, including a 2009 volume: Governing Women: Women in Politics and Governance in Developing Countries (Routlegde).