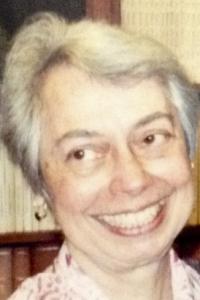 Joan Ferrante [B.A., Barnard (1958); M.A., Columbia (1959); Ph.D., Columbia (1963)] is an emeritus Professor of Comparative Literature at Columbia University. Ferrante became involved in the Human Rights Advocates Program while on the board for ISHR (then the Center for the Study of Human Rights), which oversaw the Center's programs. She was on the committee that chose the advocates, and promoted the selection of women advocates and advocates for women's issues.

During the early stages of the program, she responded to advocates' wishes to have somewhere to go at the beginning of their semester at Columbia to get to know one another and share their experiences. She and her husband invited advocates to spend a weekend at her mother-in-law's house in the Berkshires when they first arrived. Ferrante with her husband, Carey McIntosh (a scholar of 18th century literature who taught at Harvard and Rochester and served as a dean at Brown University for ten years), and her mother-in-law, Millicent Carey McIntosh (the fourth head of Barnard College, widely regarded as one of the college's most successful presidents), gave the advocates a taste of New England.

She recalls: “My husband and I took the advocates on walks, sometimes energetic hikes in the woods, and while my mother-in-law, then in her nineties, was alive, she would take them on guided tours of the area in their van--having great respect for old age, they were quite taken with her. They also spent several hours describing their experiences and their aspirations to each other and, usually after dinner, they sang or danced, sharing parts of their culture. When they came in the winter, they played in the snow with great delight. They were able to, I think, because they came to feel comfortable with each other in that setting. It was touching beyond words to see people who had been imprisoned, tortured, were in danger of their lives, making snow angels, building a snow woman--it was a Palestinian man who insisted it be a woman.

“One year when my husband was teaching in Finland and his sister and son had come to help me entertain the advocates, my sister-in-law asked what they would like to do. A Burmese advocate said he would love to try skiing, so my sister-in-law gathered all the skis and ski boots she could find around the place, outfitted several of them, and showed them the basics. I looked down from a window to see a group of advocates from Southeast Asia and sub-Saharan Africa earnestly pushing themselves around a field in the snow, falling, laughing, and getting up and going on.

“One of the things that changed over the years they came to us was the acceptance of certain customs in the house. In the early years, most of the advocates helped clear the table and wash dishes after meals, but when asked why they did not help, the Africans said that was woman's work and they did not do it. In later years, I noticed that, without any urging, there were African males at the pantry sink, washing and drying the dishes.”

Since  Ferrante retired from Columbia, she has continued to work on a database of medieval women's letters, called Epistolae, which is administered through the Columbia CCNMTL, and available online worldwide. As a scholar, she has served on the boards of Speculum, Lectura Dantis Americana, and Dante Studies, on the Executive Councils of the Medieval Academy and MLA, and as President of the Dante Society, the national Phi Beta Kappa Society, and the Medieval Academy. She has published many articles and several books, including Woman as Image in Medieval Literature, To the Glory of Her Sex: Women's Roles in the Composition of Medieval Texts, and The Political Vision of the Divine Comedy. Ferrante's interest in human rights continues now through signing petitions and making donations. She follows the careers of several of the advocates with great enthusiasm, attending some of their lectures and supporting their projects. Her concern and support have contributed to the development of the HRAP program over the years.